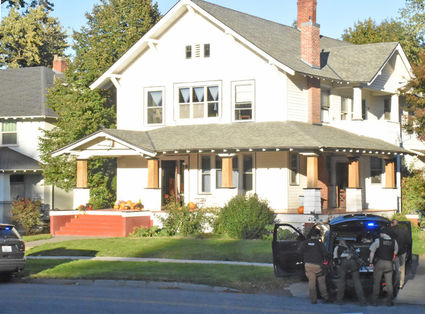 Law enforcement officers confer while occasionally using a loudspeaker to communicate with barricaded suspect Markes A. Cantrell, who was later taken into custody without incident from the residence at 329 Main Street in Waitsburg.

WAITSBURG–Columbia County Sheriff's deputies responded to an incident here to assist neighboring agencies with an incident involving a 24-year-old Waitsburg man alleged to be threatening family and others with a baseball bat on October 10.

Following the multi-hour standoff at 329 Main Street, police arrested Markes A. Cantrell of Waitsburg after locating him in hiding in the attic, allegedly...