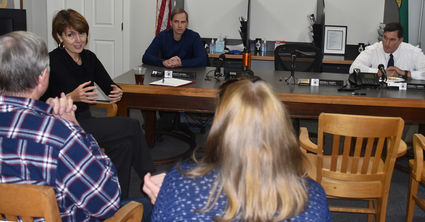 County Commissioners Mike Talbott, left, Ryan Rundell, center, and Charles Amerein, right, had an hour-long listening session with Congresswoman Cathy McMorris Rodgers, R-5th, in Commissioner's Chambers this week. Commissioners were able to express their concerns about the impacts of federal programs and agencies on Columbia County, and Rep. McMorris Rodgers covered a myriad of topics concerning the 5th District and the country. Charlotte Baker, Chronicle Managing Editor, is next to Talbott.

DAYTON–U. S. Rep. Cathy McMorris Rodgers, R-5th, visited the Board of County Commissioners (BOCC) to hear concerns and how new regulations, policy and sanctions are affecting this area last Monday, November 4. Below is a brief discussion on the topics touched on during the hour-long meeting.

The Achieving a Better Life Experience (ABLE) Act, a law originally signed by President Obama in 2014. The law was recently supplemented with two additional laws; and Congresswoman McMorris Rodgers is focused on implementing these two new laws: Able to Work Act and Able Financial Planning Act (both signed into public law December 22, 2017).

The Able to Work Act allows those with disabilities to explore the workplace by allowing someone with an ABLE account who earns income for a job to save up to the Federal Poverty Level in addition to their annual contribution limit of $14,000 (recently changed to $15,000). This is targeted to assist only those individuals with disabilities who cannot contribute to an employer retirement saving plan. The Able Financial Planning Act helps the families of those with disabilities save for their child's future by allowing for rollovers from a 529 account used for college savings to an ABLE account.

Congresswoman McMorris Rodgers is a member of the Energy and Commerce Committee and is focusing on issues with broad jurisdiction between energy, health care, and technology. There was a big hearing on ethanol last week. There have also been hearings on building materials, appliances, forestry, transportation, to name a few.

McMorris Rodgers has worked on medical residencies in rural areas for several years and laws that were passed to get more facilities in rural areas. She is excited about Washington State University having a medical school in Spokane, as well as University of Washington's Spokane Medical School on the campus of Gonzaga University. She emphasized that there are medical doctors, but no residencies. She is working on getting more residencies.

Something that concerns Dayton residents is forest management, especially concerning fires. This year, the season did not promote the devastating fires experienced by Washington State in 2017. The priority for Congresswoman McMorris Rodgers is the need for policies for healthy forests. There is currently a demonstration project for forest restoration on the Colville National Forest called the A-Z project. This is a public/private partnership involving 54,000 acres. It's a ten-year contract on its third year. This promotes a collaborative approach. McMorris Rodgers reported that there was a significant improvement (120 million board-feet) in timber harvest. She did state that grazing was not part of the study, but should be considered.

The next issue was on the issue of taking out the three lower Snake River Dams for the purpose of preserving Salmon. McMorris Rodgers mentioned that in the 1990's Chinook Salmon went extinct in Lake Washington because the salmon could not get over the Ballard locks. The salmon were being eaten by sea lions. Legislation was passed in December of 2018 (Public Law No: 115-329 Endangered Salmon Predation Prevention Act) to allow for the taking of sea lions at the mouth of the Columbia River. However, the bill exempted Puget Sound! She has requested a briefing from the Army Corps of Engineers as to why this happened. She has offered to be a partner with the Puget Sound Salmon Recovery Board to help recover salmon.

She also stated that Bonneville Power Administration said that if it had not been for the four Lower Snake River Dams (Ice Harbor Dam, Lower Monumental Dam, Little Goose Dam, and Lower Granite Dam; all in the State of Washington), there would have been blackouts!

The issues the Commissioners' brought forth was housing issue. More jobs are coming in because of Columbia Pulp, but some of the workers are commuting from area towns and cities.

Another issue for the county is getting grants for projects. There are lots of grants available, but the applications are more than 100 pages long and the County cannot afford to hire a grant writer. Congresswoman McMorris Rodgers mentioned that she can help get connections with the right people. Lastly, Columbia County Treasurer Carla Rowe mentioned that Columbia County lost $6 million dollars due to the 75% sales tax exemption (state law) on renewable energy. This makes the county less inclined to support renewable energy projects as there is no tax revenue for the county. The exemption was supposed to expire at the end of 2019, but the law was extended.

It was expressed that more students are going into specific trades found at the Community College level and grants and other ways to pay for these programs have been limited. McMorris Rodgers is working on getting legislation passed for Pell Grants to be used in trade schools. Currently Pell Grants can only be used for a four-year college.

Other topics touched on during the McMorris-Rodger visit are the opioid crisis, the wall, USA Act, free tuition, and the VA.

In the last Congress, there was legislation passed to combat opioids. There is grant money for prevention, treatment. There is a major lawsuit around pharmaceutical companies. Large amounts of fentanyl (a powerful synthetic opiod 50 to 100 times more powerful than morphine) is coming from China

The wall is underway, hundreds of miles. During the first two years of President Trump's administration, approximately $6 billion was appropriated into law for construction of the wall. Although Congresswoman McMorris Rodgers supports the wall, she did not support the Executive Order to move money from Military Construction to build the wall. Her concern is that it sets a precedent for future Presidents to unilaterally decide how to spend money. She feels this is bad precedent.

There is currently a Continuing Resolution funding the federal government, which will expire on November 21, 2019. She testified before Senator Rand Paul's committee for legislation that she introduced, the USA Act (Unauthorized Spending Accountability). There are hundreds of departments, programs and agencies in the Federal Government that continue to get funded even though their authorizations have expired. They are affectionately called "zombie" programs, or programs on "autopilot." It is estimated that between a quarter and a third of Federal spending is subject to Congressional oversight. The remainder is what is on " autopilot." Some of it is unauthorized programs. McMorris Rodgers stated that Medicare and Medicaid, known as "entitlement" programs, are also part of this "autopilot" and not subject to Congressional review. There are court cases that need to be overturned. The Supreme Court has under mined Congressional authority. She specifically mentioned the Chevron Decision (Chevron USA, Inc. vs. Natural Resource Defense Council, Inc, 1984). When there is a disagreement between what the law that was passed says, and what an agency introduces in a proposed rule, the deference goes to the agency. This undermines the law and Congressional intent. She is hopeful there will be an opportunity to review this law.

Veterans Administration (VA) Data Sharing. The Veterans Administration recently announced that information would be shared with other agencies and if you don't want to participate you have to opt out. As a former soldier, Commissioner Charles Amerein used to advise people coming out of the military to sign up with the VA so you wouldn't have to pay extra money for Obamacare insurance. 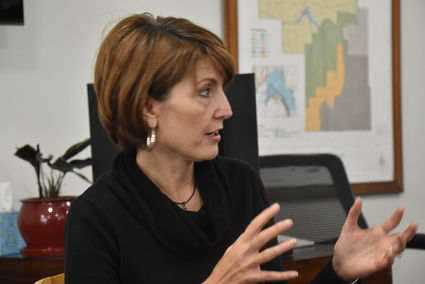 Commissioner Chuck Amerein is concerned about the data sharing. McMorris Rodgers stated that the Spokane Veteran's Administration (VA) is going to be the first VA to participate in a "seamless medical record" process. Instead of signing up for a whole new medical record from scratch, the VA will take medical records directly from Department of Defense. That record would follow you. Commissioner Amerein is concerned that the sharing would end up being done for other purposes and the information would not be protected and there would be no consequences for violating the rules.

Finally, how is the focus on impeachment effecting what is happening in the country and world? The resolution to open up the impeachment inquiry has been dominant, and making it difficult to focus on issues at hand. But President Trump has been making positive strides for this country.