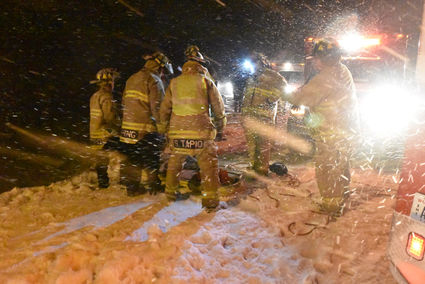 Five people from Hermiston, Ore. sustained injuries in a rollover accident late Monday night 14 miles north of Dayton. Fire and ambulance personnel from Districts 1 and 3 responded in the swirling snowfall, helping move the injured up a steep embankment after the pickup crashed through a guard rail and rolled. All sustained injuries and were transported by Fire District No. 3 ambulance to Dayton General Hospital.

DAYTON–Five people in a pickup headed for Hermiston, Ore., were injured in a late-night crash at the intersection of State Route 12 and 261 Monday, January 13, 2020.