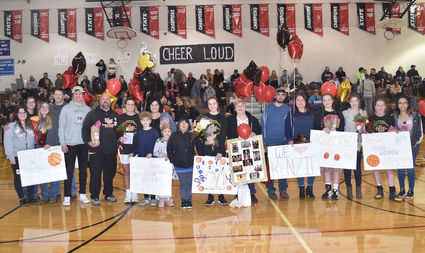 Senior members of the Dayton-Waitsburg Girls Basketball team and their families.

Senior members of the Dayton-Waitsburg Girls Basketball team were recognized along with family members during Senior Night Ceremonies last Friday night before the Liberty Christian game. They were, from left, Elise Steinhoff, Kirsten Miller, Destiny Brincken, Mackenzie Dobbs and Kira Boggs. Steinhoff is a three-year veteran of basketball and cherishes all of her high-school memories. She also participated in volleyball and softball and plans to become an elementary school teacher after attending WWCC and EWU. She thanked her coaches, parents, family and teammates. Miller has played three years and loved spending time with teammates. Other sports included volleyball and track, and she is a National Honor Society member. Her goal is to attend the University of Hawaii studying marine biology. She advises athletes to be self-motivated, and work or play like it's the last time. She thanked friends, family, teachers and coaches. Brincken, another three-year veteran, remembers going to state as a freshman, and has been in soccer and Young Life. Her career goal is to become a police or correctional officer and she thanked her mother, family, teammates and coaches. Dobbs played this year but wishes she had played all four years. Her favorite memory is being pulled to the ground during a block-out drill and she urged future athletes to play all the sports possible. Her activities included cheer, volleyball, Young Life, softball, 4-H and FFA. She will attend WSU to study animal science and zoology, and she appreciated her coaches' "pushing," her parents' support, Destiny for urging her to play and her grandmother Lori "for watching over me." Boggs is a four-year basketball player who has been active in ASB, FFA, NHS and other sports. She fondly remembers the facial expressions when the team learned they made the playoffs. Her plans are to attend Grand Canyon University and earn a Masters degree in science and nursing. She thanked her coaches, parents and close family friends.