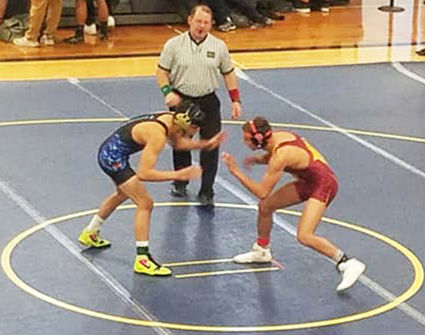 Carlos Norris, Dayton-Waitsburg's 138-lb. wrestler, faces off with a competitor during a match at Regionals last week.

The 138-lb. wrestler, who practices and competes at matches with the Pomeroy Pirates, coached by Head Coach Ben Slaybaugh, and Asst. Coach Mat Slaybaugh, pinned two wrestlers on his way to the championship match but lost by fall in the third round to finish second.