The Meaning of a Special Life 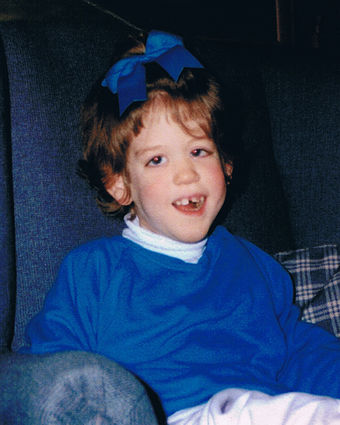 When people die, questions about life and its meaning rise above the clutter of everyday comings and goings.

It's an ethereal question that has continued through the ages and confounded the greatest of minds.

Our daughter Whitney left this world last week, and, for the first time, is standing tall, chattering with her grandfathers Tom Baker and Ted Berry and friends and clearly seeing her heavenly realm.

By society's standards, she was profoundly mentally retarded and physically unable to do most anything.

Her brother Matt, when he was three or four, was asked by a friend about his sister. Busy playing with Legos on the floor, he politely answered her questions about his family.

She never walked or talked, and one of her most significant accomplishments was learning to suck through a straw. With that skill she could be given puréed meals and enjoy the flavors of life we all enjoy, one of her favorites being a Big Mac, or anything sweet.

Like her grandfather Tom and brother Matt, she was tall and lean, and would've been taller had scoliosis not made a question mark of her spine.

She had deep blue eyes but her consciousness and the dimension in which she was traveling rarely called on those baby blues for connections with other people, so when she did stop bobbing her head to look at you, it was a very special moment.

Did her life have meaning? You bet it did.

Although she was nonverbal, it didn't mean she couldn't communicate. When her little brother Matt came along, he was crawling around and took her bottle from her. She clouded up and bawled lustily, letting Mom know she'd been wronged.

Therapists learned, too. We were informed that Whitney was deaf. "How so?" we asked. The test was to ring a bell behind and to the left of Whitney. They did that and Whit turned left, looking for the sound. Then they did it on the right. She turned to the sound.

Trying the left again, the right again, there was no response. Hmmm...they concluded, she's deaf.

One of her fellow residents at St. Anne's Children's Home would suffer bouts of loud, long moaning. It had to be nerve wracking for the staff. We don't know what made them try it, but they laid Whitney next to him and her presence and occasional touches calmed him and the rest of the residents on the floor.

Unlike most of her compatriots, Whitney had fine motor skills and loved to play with keyboards and other infant-level toys that had bright, flashing lights and cheery sounds. She was almost constantly in motion.

In recent years, Whitney did not like people around her when she was eating a meal. If we visited at about 1:30 in the afternoon, we'd notice it was her lunchtime, but it never occurred to us that the staff was not bustling about the kitchen. We were also getting the cold shoulder from Whit.

See that dent in the fridge door? Whitney had "communicated" her displeasure of having people around while enjoying a hamburger and fries (no kidding) and had bounced her wheelchair until it banged into the refrigerator.

In 1994, Whit and her friends had to move from St. Anne's. We made a special trip to tell her the news. She loved being rocked and sucking her thumb at that age, and when told of the upcoming change, she threw her head back and laughed. A big, boisterous laugh. "What are you so worried about," her laugh said.

Then she went back to being Whitney, traveling the cosmos in her mind.

That situation helped parents of candihapped children in Washington. We learned that D.S.H.S. does not have authority to overrule parental control and decision making, unless abuse is involved. We also learned about the Froberg Act, which stipulates that the level of care cannot go backward: if a resident was receiving 24-hour nursing care, that level must be maintained at the next residence or care facility.

Whitney had all the emotions of a normal person, just expressed differently. The art was in the interpretation. Thanks to one of the ARC supervisors, Brenda, we reconfigured our perceptions. Whitney was not a handicapped daughter. She was a person who needed a lot of help with daily living.

After that, we took in a Spokane Chiefs hockey game. The "wow" of entering such a big room with so many bright lights and announcer blaring confused her for a spell, but we put our heads together and talked about where we were and that it was okay.

If Whitney heard the Paratransit rig's backup alarm, she would protest vociferously until someone put her coat on and let her go for a ride.

In their youth, her brothers Matt and Morgan were in Salt & Light Music Ministry, which would visit Whitney if touring in the Spokane area. For the brothers, it was a special visit with their sister because their friends got to meet this powerless, frail little girl who, by simply existing, turned the spotlight inward. "Have you ever met an angel? I have," Madeline Cavazos would later write of her 2006 visit. "Whitney and people like Whitney are perfect. They were untouched by everything evil in the world. ...Their bodies and minds were not like ours, and so they made up for it by being perfect, their hearts being perfect on the inside."

At her home in the Spokane Valley, she made deep, lasting impressions as a compassionate human being. Brenda tells the story: "I had passed by that client's [Whitney's] bedroom door a second time that morning and saw Rose (whose best friend had just died) doing the client's hair. She was cooing to her softly about how thick and gorgeous her hair was and how it reminded her of her friend's... a hitch caught in her voice when she couldn't complete the sentence. I stopped before fully passing the door of the bedroom, thinking maybe work wasn't the best place for her after all. I stood and watched from the doorway to see if she would just need to take a moment, or if she needed to take the rest of the day off.

"And then one of those amazing snapshots came," Brenda wrote. "Whitney stopped her perpetual motion, looked directly at Rose's face, reached out one of her constantly moving hands and softly caressed Rose's cheek, just like a mother to a child in despair. Suddenly, I was again breathless. Tears burned my eyes as they filled and overflowed, tracing warm paths down my awestruck face."

In "The Power of the Powerless," Christopher de Vinck's inspirational book about his disabled brother Oliver, de Vinck writes that Oliver "still remains the weakest, most helpless human being I ever met, and yet he was one of the most powerful human beings I ever met. He could do absolutely nothing except breathe, sleep, eat, and yet he was responsible for action, love, courage, insight."

Whitney wasn't supposed to live more than a year. But the light that burned inside her, that kept her in perpetual motion playing with musical keyboards when seated in her wheelchair, burned for 34 bonus years. In those years she touched many people in profound ways and is now flying unfettered across the Heavens.

My dear wife Charlotte put it best: "Her voice is now on the breeze, her smile is the sunshine, her laughter is the babbling brook, the twinkle of her eyes are the sparkles bouncing across the water and her happiness is all shades of the rainbow. Ssshhh...if you are quiet, you can hear her dancing across the clouds."