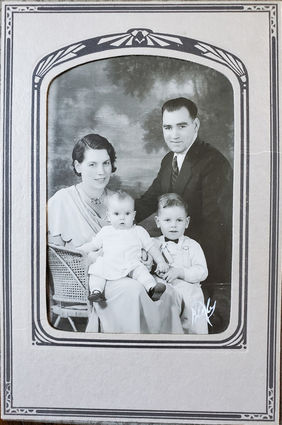 The photo reproduced from a negative found by Kim Lyonnais within a wall in the former Frontier Too Tavern, which is under renovation, is one of the portraits not chosen by Mr. and Mrs. George H. Douglas, pictured in the pose that was chosen over others.

DAYTON–Debbie Seney recognized her father and his family immediately from the front page of the Dayton Chronicle last week.

The family of four in the photo, recovered from within a wall of the building at 211 E. Main Street, is Seney's grandparents, George Henry Douglas and Isabelle (Banks) Douglas; her aunt Sally Douglas McHargue, and her father, Ronald G. Douglas.

This photo printed in last...