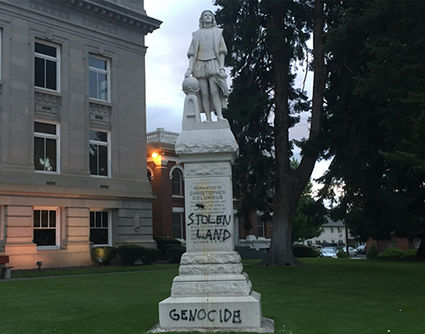 The Christopher Columbus statue which is displayed on the front lawn of the Walla Walla Courthouse was defaced with the words "Stolen Land" and "Genocide" spray painted across the front. A suspect was observed by a surveillance camera, approaching the statue on June 30, 2020 at 11:55 p.m. The Walla Walla Sheriff's Office is investigating.

WALLA WALLA–The statue of Christopher Columbus, which resides on the lawn in front of the Walla Walla County Courthouse, was vandalized with spray paint late in the evening of June 30 or early in the morning of July 1. A surveillance camera captured a possible suspect approaching the statue at approximately 11:55 p.m. The Walla Walla Sheriff's Office is investigating.