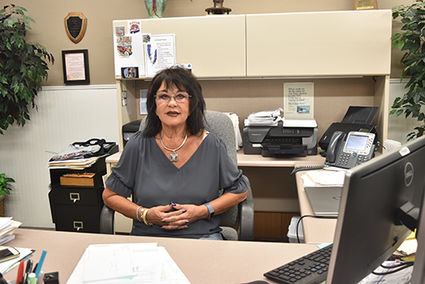 Long-time State Farm Agent Bette Lou Crothers will retire at the end of the month and basks in the glow of a busy yet fulfilling career serving the insurance needs of the area, and for her role in community activities.

DAYTON–"I liked it from the beginning," Bette Lou Crothers says of the insurance business. Crothers announced her plans to retire July 31, 2020, just shy of starting what would have been her fortieth year as a State Farm insurance agent in Dayton.

"Several sets of circumstances and my age came together ... and it was time [to retire]," Crothers said this week. "And I'm at peace with that decision."

The agency will continue, Crothers said. On a temporary basis, Agent Mike Stensrude of Walla Walla will work with local staff Diana Ashley and Angela Black at the 201 E. Main Street offices while the company prepares to name a successor, probably in the first quarter of 2021. Stensrude will spend time in the Dayton office each week.

Crothers insisted that the agency remain and employees retained while her successor is selected.

She didn't make the decision lightly. "One of my biggest hesitations about retiring," Crothers said, "was that I've been downtown almost forty years and I'm used to being around people every day.

"I've truly enjoyed my policy holders and feel fortunate because of the community we're in," she said. "Policy holders are like family members. I so appreciate their support and loyalty all these years."

"I have stood at fires and literally handed out cost-of-living expense checks," Crothers remembers. "While insurance can be a difficult profession, when you see someone lose all or most of what they've worked for for years, and you can be there to help, that's the fulfilling part.

Crothers recalls the year 2009 when crop insurance policies included protection against market fluctuations, and that year the difference between the market price and what the policy guaranteed was $4. "One policy holder said 'with this check, you have saved a three-generation family farm,' and another, with tears in his eyes, said 'by the end of this day, I'll finally be debt free.'" That year Crothers passed out between $3 and $4 million.

Crothers' father and mother, Gene and Sammy Anderson, came to Dayton in the 1960s to work on Little Goose and Lower Monumental dams, and her growing years had been a succession of cities and towns in Arizona, Oregon, California and Washington, including being the only fourth grader in Steptoe School. She was here for the last two years of high school, graduating with the Class of 1968.

She married Gene Crothers on Valentine's Day, 1970, and they have two daughters and a son: Kimberlea Seney of Dayton, Jennifer Hughes of Kennewick, and Daron McCauley of Kent. Gene's four-year battle with cancer was lost in May, 2019.

While her daughters were young, she worked seasonally in the Green Giant Cannery, packing asparagus, and when Jennifer was ready to start Kindergarten, Crothers started looking around Dayton for a job.

In no time, Wally Payne called, then stopped at her home, to talk about their insurance policies, she thought. He wanted to hire her.

"You don't want to hire me," she remembers saying. "I don't know anything about insurance."

Payne replied that he can teach her about insurance; he can't teach her a work ethic.

Several years later she was offered the State Farm Agency upon the retirement of Floyd McCauley, Dayton's television repairman and State Farm insurance agent. She opened up shop, renting an office in what is now the Dayton Chamber of Commerce, 166 E. Main Street, on September 1, 1981.

"I had no idea what I was entering," Crothers said. "But I truly knew from the beginning that I really liked this."

Initially, she thought her goal was the financial well-being that the career could provide, but she found that the fulfilling part was building something and embracing it with the community-sharing in people's lives. "That's much more fulfilling than the finances, and that is a true statement," Crothers said.

"What keeps me young, is that I'm an absolute believer in counting my blessings-I live in a great place; I've got a great career; my children and grandchildren are healthy and have a good life," Crothers said.

"I'm looking forward to even more time to work for my hometown that I love-Dayton," she said.