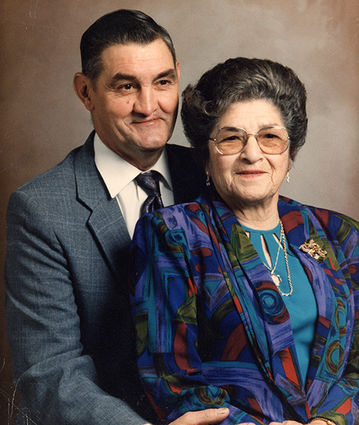 On July 28, 2020, our beloved mother, grandmother and great and greatgreat grandmother went to be with her beloved husband Donny Koschmeder, whom she missed very much. Happy to be together again, they are now dancing up a storm, which they both enjoyed.

A feisty 94 year old, she had a good life in Dayton.

She moved to Dayton with her three daughters in 1960, Mary Ellen Wilson (Robert), Janie Benavides (Lupé) and Sylvia Griffen (Ron).

She was a Spanish translator for the ladies that came from Mexico to work in the cannery. Working under Leah Stockton at the Elementary School, for the Migrant Program in the summer.

She enjoyed working with the kids because she felt she was learning right along with them.

While working nights as a dish washer in Dorsey's Restaurant, she met this handsome "gentleman." After dating for a while, they got married April 1, 1961.

After marriage, Dad decided she should be a stay-at-home mom. After losing four infant sons, Dad decided three girls were enough.

While Dad was working, she decided to tear into a washing machine after it broke down. She got it to work again even though she had two extra screws left. But it ran. She wasn't afraid to try anything.

She was very active in the Eagles Club and held many offices and had different titles. She enjoyed it a lot because it was something she and Dad enjoyed doing together.

She was also active in her Catholic faith as a Eucharistic Minister for the church.

When she was not off and running somewhere, she enjoyed all of her "favorite grandkids" and great grandkids.

She especially enjoyed playing Scrabble with the older grandkids, but you had to watch her carefully because she liked to cheat by making up her own words in English and Spanish.

Services will be held at 11 a.m. on Saturday, August 15, at St. Joseph Catholic Church. Due to COVID-19 restrictions, we are only allowed 30 people in the church following the memorial service.

Joint burial of Don and Toni will be at the Dayton Cemetery.

A Celebration of Life at the Dayton Eagles will follow the cemetery service.