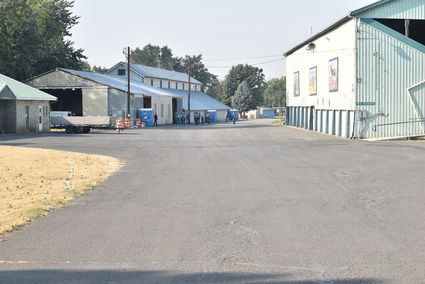 An empty Midway and shuttered vendor booths uncharacteristically marked the mood of the 2020 Columbia County Fair, held virtually last weekend with only exhibitors, judges and Fair volunteers in attendance. At the swine ring, exhibitors maintained physical distance while waiting for their turn in the ring for fitting and showing, and market competition.

DAYTON–The 2020 Columbia County Fair was like no other in its 130-year history. The fairgrounds were eerily quiet where, in years past, this corner of Dayton teemed with activity: people lined up for cheeseburgers, families strolling through the Midway and Pavilion, enjoying live music and viewing still-life exhibits, and young boys and girls striving to show their beef, swine, sheep or what-have-you to the best of their ability.

This year, a limited number of masked exhibitors, divided into high school, middle school and elementary school classes rather than 4-H and FFA, showed beef, swine, goats and sheep. A half dozen or so showed poultry and rabbits.

The Columbia County Fair made the best of a difficult situation where coronavirus pandemic concerns have decimated the community's social fabric by the cancellation of various events since the virus became prevalent in late February.

The Columbia County Fair Board worked on solutions and adapted usual and customary activities to, at the very least, hold exhibits for the community's youth.

"It went smooth," commented Fair President Matt Johnson. "I'm glad we were able to do it and hope we never have to do it this way again."

Livestock entries numbered 10 goat, six sheep, a dozen beef and 36 swine projects. Fitting and showing, and market classes were live-streamed on Facebook so interested members of the public could be included. At each show ring, an official Fair videographer streamed the scene over the internet. For example, during beef fitting and showing, some 30-40 people were watching online.

"We wanted to do something for our youth," said County Commissioner Mike Talbott, referring to the Board of County Commissioners' support of conducting a virtual fair under COVID-19 restrictions. "We worked with the Fair Board and the Public Health Department, and they would tell us what they wanted, and we agreed on the fairgrounds being open and animals being there."

Livestock shows Friday and Saturday decided the top entries for fitting and showing, and market, then local individuals and businesses, screened for temperature and COVID-19 symptoms, as were all attendees, at the gate, spread out before the outdoor auction ring and generously bid on project animals.

Johnson wryly added that Facebook deemed the Youth Livestock Sale in violation of its "community standards" and deleted the event from the Fair's Facebook page.