DAYTON–Firefighting resources are mobilizing in Whitman County and near Ukiah, Ore., just two relatively close fires that are contributing to severe smoke in the western United States.

Air-quality indexes were high on the hazardous level starting around Fair weekend, according to the Washington Department of Ecology. On a scale of 0-500, the worst air-quality reading was in Toppenish-Yakama Tribe at 438 on the PM2.5 scale.

Dayton's reading of 300 was 26th worst in the state Tuesday. Twenty seven locations in Washington were above 300.

The sources of smoke are many. In Washington state, there are 683,502 acres actively burning as of Tuesday, September 15, according to Carol Connolly, PIO with the Northwest Interagency Coordination Center. Oregon has 898,842 acres on fire as of this week.

The Wawawai Canyon Fire started on September 12, 2020, at approximately 12:56 a.m. This fire is estimated at 150 acres and growing. It is threatening structures, range land, crop land, and Wawawai County Park. The fire cause is currently under investigation. Mobilization specialists from the Fire Protection Bureau have ordered one strike team and air support. 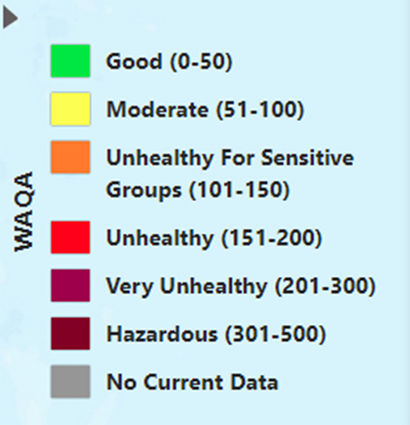 The Birch Creek Fire, which is currently estimated at 30 acres, was reported on Monday, Sept. 14 at 11:22 a.m. The fire is burning in grass and timber. The cause of the fire is under investigation.

The fire is burning to the northeast with active runs, crowning, torching, and spotting with some slow backing growth to the south. Gusty winds are contributing to increased fire behavior and growth. Visibility within the area is poor. The movement of the fire has prompted evacuations of individuals camping in Granite Meadows and Pearson Canyon area. Fire crews, with support from the Umatilla County Sheriff's Office, are escorting campers outside the fire area to safety.