Beatty Family celebrates Scouting legacy which had start in Dayton 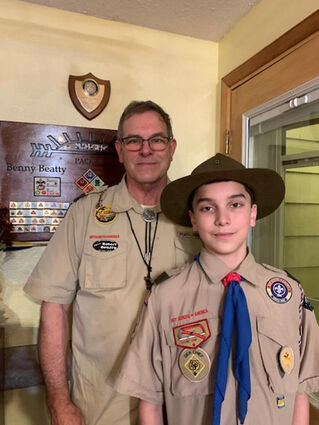 The value and legacy of being involved in Boy Scouts of America is underscored by the example of Robert and Benny Beatty. Benny, 12, is working on merit badges towards his Eagle Scout award someday, and is wearing his grandfather Harold's original scout hat. Robert's uniform sports his 1969 National Jamboree patch.

Fifty years ago and then there is today.

As I looked over the Dayton Chronicle, I always enjoy reading what happened years ago. It was a bit of a surprise when I saw my name listed there for my Eagle project some 50 years ago on 19 November 1970.

But here is the front story. Fifty years later almost to the day, myself, Robert Beatty, (son of Har...