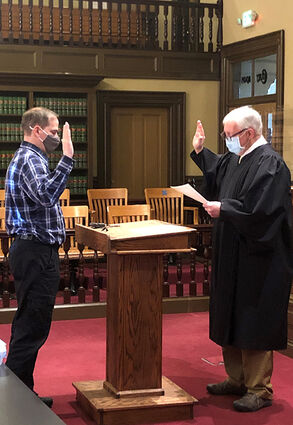 Columbia County District Court Judge G. Scott Marinella administers the oath of office to Commissioner Ryan Rundell during a ceremony in the Superior Court room December 21. Rundell was recently re-elected and will serve 2021 as chairman.

DAYTON–The five-year contract with the City of Dayton for County Services was voted on and approved by the Columbia County Commissioners at its December 21 meeting.

The contract amount of $612,500 will be allocated between Emergency Management, the Sheriff's Department, the County Attorney's Office and the courts. The contract was signed by the Commissioners and later by Slack. Commissioner C...