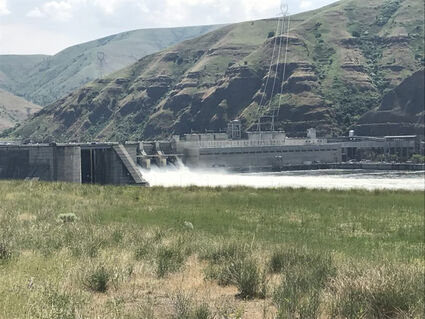 The statement is in response to a plan by Rep. Mike Simpson (R-2-ID) to save anadromous salmon to, if appears, boost salmon populations in Idaho's 2nd Congressional Districts. One problem, Commissioners here point out, is that Simpson's plan affects Washington's 4th and 5th Congressional districts.

The Congressman from the 2nd District of Idaho State, Mike Simpson has brought forward a plan to look at removing the Lower Snake River Dams. These dams are incidentally, located in the 4th and 5th Congressional Districts of Washington State.

The stated purpose for this plan is to address the question of what to do to preserve the Idaho's 2nd District's access to Salmon. As the 2nd District has no other stake in this discussion, this is of course appropriate.

In his proposal, the Congressman makes note of the various essential roles that these dams play in their region. He acknowledges their importance in relation to transportation, agriculture, recreation, flood control, and renewable energy in the immediate and surrounding areas. Unfortunately, all of these factors appear to not be as important in the overall scheme of things as Salmon recovery. He does admit though, that his plan is no guarantee of survival for the Salmon. His answer for replacing these functions after removing the dams is simply to provide funding to study and fix whatever shortcomings may arise.

While we can appreciate the Congressman's concern for his constituents needs, it does the 2nd District and its citizens no good to weaken the Nation that they are a part for such a speculative and narrow benefit.

The facts and figures that explain the essential and beneficial nature of the dams are of no use when put against the emotional reasoning of those in opposition to them. The documented impact the dams have on Salmon migration as well as anecdotal evidence suggest that more benefit might be achieved by addressing what happens to the Salmon in the ocean, than in destroying a priceless legacy left to us by previous generations.

The Congressman states that he has held over 300 meetings with multiple stakeholders to help develop this plan. As the elected body representing the people of Columbia County in the 5th Congressional District of Washington, we can state unequivocally that we have never been contacted by the Congressman or his office in regards to this matter, nor have we heard from any other elected body in our region about efforts made to contact them. All of us are familiar, however, with the frequent attempts made by various progressive entities in the past, to bring about the same end as the Congressman's plan.

It is a bold thing indeed to attempt to reach across the aisle in today's political climate, but we could perhaps hope it would be on some other issue instead. Removal of the Lower Snake River Dams is not something that will benefit the people of our region, or our Nation as a whole. Hopefully it is not in keeping with ideals and principles that Mr. Simpson endorsed when running for office either.

This plan will only impoverish and harm our Country, while doing nothing certain to address the issue of Salmon recovery. With so many resources being wasted recently at the Federal level, further pursuit of this goal will only add to the economic difficulties our great Nation will be subject to in the near future. We call on the Congressman to abandon his plan, and to work instead to help strengthen and rebuild those things that made the United States the greatest nation on earth.