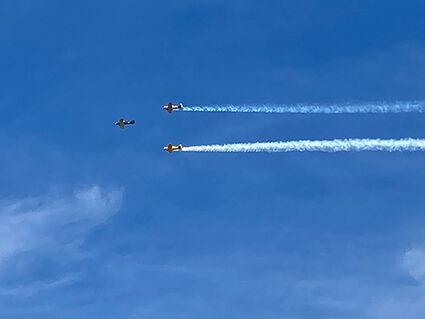 Memorial Day 2021 was commemorated by a warbird tribute over the Touchet Valley courtesy of patriotic Hangar 180 of Lewiston. The three-airplane formation droned over Dayton on Saturday with smoke on, circling to the west and retracing the flight path to the east, where it had flown over a dedication ceremony in Pomeroy. In the lead airplane was Gary Peters, a Pomeroy native, flying a North American P-64, with two North American AT-6s flying wing. No. 2 was flown by Amelia Hilsen, and in No. 3 was Chris Carswell.