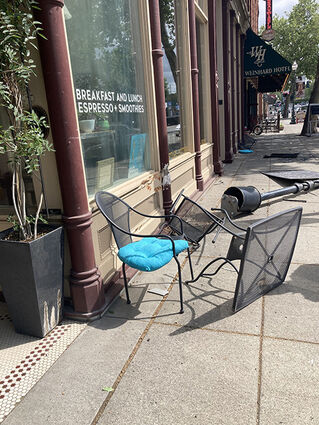 There were no injuries following a May 20 incident in the 200 block of Dayton's Main Street where a van later identified as a 2007 Dodge Caravan, driven by an unidentified person, careened down the sidewalk, taking out this bistro table and chairs, a wayfarer sign and damaging the building that houses Locally Nourished and Wenaha Gallery.

DAYTON–Investigations by the Columbia County Sheriff's Office and Washington State Patrol have not turned up any new information regarding the identity of the individual who drove a van on a Main Street sidewalk here May 20. The incident is being classified as a hit and run, according to Trooper Christopher Thorson.

The incident, reported in the Dayton Chronicle's May 27 edition, involved a g...