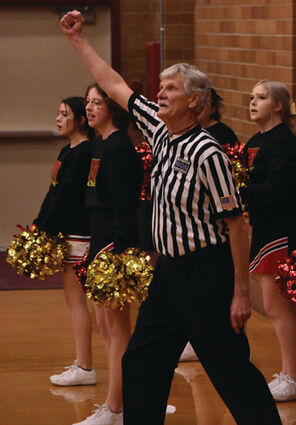 Lon Olson signals a foul in his final varsity game on the Dayton High School Gym maple earlier this week. Olson, 80, has been officiating varsity basketball since 1974, and chose reffing a Dayton-Waitsburg home game for his last game.

DAYTON–Last Tuesday's basketball game was a special one at the Dayton High School gym...not because of a winning streak or a long shot swished, but because the game marked the final high school contest to be officiated by 80-year-old Lon Olson.

Olson chose to ref this DW versus Walla Walla Valley Academy game as his last "because I can," he told the Dayton Chronicle, and because he had just t...