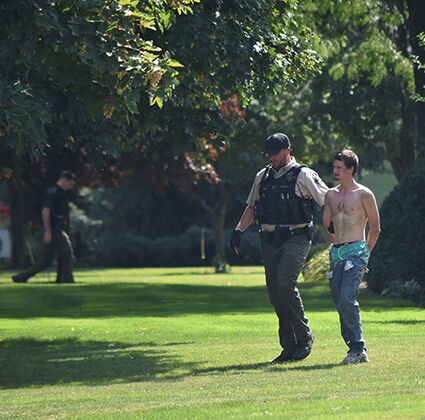 Michael J. Testerman was escorted to an awaiting patrol vehicle by Columbia County Deputy Blake Ahlers after officers pursued the man through several back yards of homes along South 1st Street last Wednesday, September 7. Testerman was wanted for questioning following a number of car prowls reported that morning, was located but allegedly attempted to elude officers on foot until being apprehended.

DAYTON–A 26-year-old Dayton man is in jail after leading Columbia County Sheriff's Office deputies on a circuitous chase through residential back yards Wednesday, September 7. The incident's proximity to the Dayton Schools campus prompted school officials to implement a "soft lockdown" while the subject was at large.