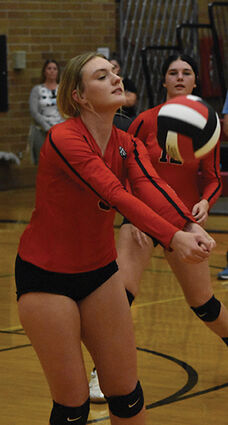 TOUCHET–The Dayton-Waitsburg Lady Wolfpack has dipped their toe into the 2022 league campaign, notching a four-set win over Touchet last Monday to hold a 1-2 record in league and a 3-2 overall record.

The team had a second consecutive road trip on Tuesday to Tri-Cities Prep then hosts Columbia-Burbank for a Homecoming Week match tonight, September 22, at the Dayton Gym. Following that match will be Stud Volleyball.

At Touchet, DW jumped on the Redhawks in the first set 25-16 but floundered a little, losing the second 20-25. They bounced back with a harrowing 27-25 win in the third set and wrapped it up with a 25-16 match win.

"I am very proud of how this team came together to fight for the win," said Head Coach Tracy Barron. "The younger classmen stepped up in a big way to learn new positions."

"This team's net play continues to improve every game," Coach Barron said. "Our passing was much more consistent than in previous games."

Against WWVA's attack, Henry led with 17 assists and Makenna Barron made 10 assists. Barron had six blocks and Claudia Benavides three.

Henry, Barron and Benavides each made three kills. 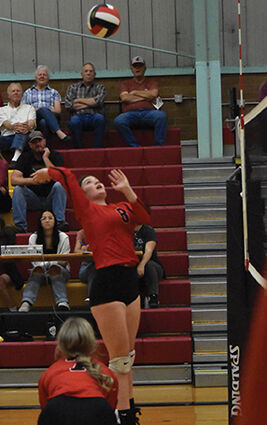 Wolfpack outside hitter Kylee Henry zeroes in on the ball to fire a kill at Walla Walla Valley Academy's front line in last week's three-set loss to the Lady Knights. Henry made nine kills and 18 assists in this week's win over the Touchet Redhawks.

"The girls really came back strong after a hard loss the night before," said Coach Barron. "They continued with strong net play and worked hard to improve their passing."

In spite of the loss, Coach Barron was positive. "The team's net play was really great tonight," she said. "Our blockers got hands on a lot of really tough hits. Emily Rodrick, our libero, made some great passes in the back row for us."

Mann was the kill leader with five and Barron nailed four. Both Henry and Barron counted nine assists.