History of power farming documentary to be screened 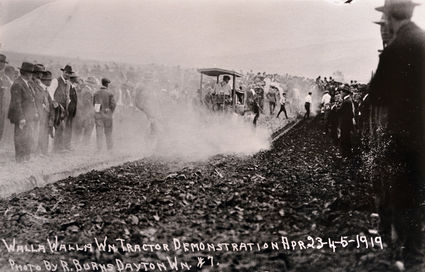 DAYTON–A free showing of the documentary “The 1919 Walla Walla Tractor Show” will be held as part of Blue Mountain Land Trust’s centennial anniversary celebration at the Delany Room on November 5 at 7 p.m.

Power farming expositions, such as this one, were happening all over the nation and Europe, to help farmers decide if a tractor was worth the investment? In addition, the latest in farm and domestic innovations were showcased, such as electric power plants, power cream separators, electric rug cleaners and washing machines. In 1918, the regional tractor show was held in Pullman, and was attended by 10,000 people, including farmers from our area.

The Walla Walla Tractor Show was touted to be the biggest exposition this side of the Mississippi, attended by 49,000 persons over the three-day event. The housing alone of roughly 15,000 out-of-town guests was a herculean task accomplished with the help of neighboring communities.

The Blue Mountain Music Festival, held at the same time and also a monumental undertaking, provided evening entertainment for the huge influx of visitors. The four-night musical extravaganza consisted of three concerts and two operettas, involving 350 voices from Waitsburg, Dayton, Prescott, Washtucna, Pasco, Kennewick, Milton and Freewater. A giant tent pavilion with seating for 3,000 was erected in downtown Walla Walla.

“The 1919 Walla Walla Tractor Show” informs you about the role WWI played in the push to transition to power farming, and the challenges that our topography presented to self-propelled machinery. It tells the story of how our community was able to plan and execute two extraordinary events, the ag expo and the music festival, in short order, without the aid of computers or social media. 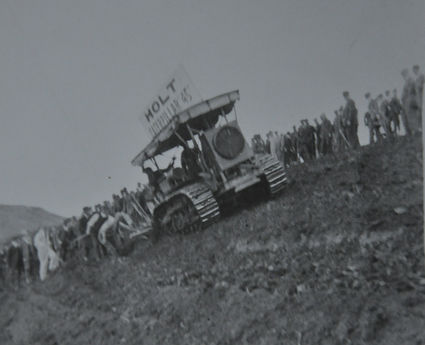 Waitsburg area farmer, Lz Conover, shares his painful reminiscence of when his dad made the transition to tractors from his team of hardworking animals. The startling similarities between the 1919 Tractor Show and the Gentlemen of the Road Stopover Tour event held in Walla Walla in 2015 are explored, highlighting the message that our community can accomplish great things through our ‘roll up your sleeves and get things done’ spirit as well as our innate collaborative nature.

The Waitsburg Commercial Club will host the community viewing at the Town Hall on November 6 at 7 p.m., and The Tuxedo Tavern will host on November 8 at 7 p.m.

Refreshments will be available for purchase at the Waitsburg and Prescott events.