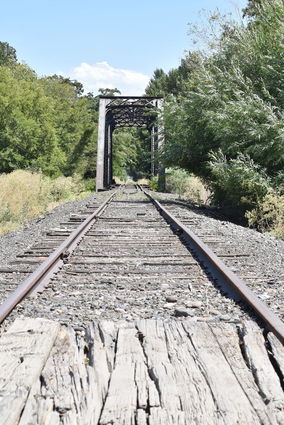 A Charrette (or Charette or Charet) is defined as an "intense period of design or planning." It is a French word for "cart" or "chariot" and originated in Paris in the 19th century where a team of student architects would work right up to the deadline. At that point a cart would be wheeled around to collect their designs. And with that, the four talented teams of student landscape architects were off to the races and worked right up to the deadline to give four ideas for the proposed Touchet Trail.

The issue of how crossings would be managed to avoid potential collisions with trains using the railway was answered in this way. For many reasons, mostly pertaining to right of ways and terrain issues, it is not feasible to keep the trail to one particular side of the existing railway. Further, there are "interest attractions" where it would be safer for the trail to cross the railroad so that users will not leave the trail to view the attraction. Therefore, many different railway crossing ideas were shown. However, none of the ideas presented addressed accident prevention.

Revised Code of Washington (RCW) 81.53.261 places the burden on the governing body of a city or county to file a petition with the Washington Utilities and Transportation Commission for the installation of signals or warning devices. Representatives from the teams at the Charrette mentioned that due to the infrequent number of trains on the rails, the speed of the trains on those rails (stated specifically as 5-10 mph), and the speed of the users of the trails (hikers, bikers, equestrians); that arm barriers or signals was not an option for the design. Paul Didelius, owner (and rail operator) of Columbia Rail, concurred, adding that not all railroad crossings get a barrier due to funding.

A representative from one of the teams stated that pavement treatments would be used to alert all users of the trail of a potential issue. Ms. Andrea Weckmueller-Behringer, Executive Director of Walla Walla Metropolitan Planning Organization, mentioned that pavement treatments would most likely be "truncated domes" (the general public knows them as "rumble strips"). Weckmueller-Behringer further added that the truncated domes help alert sight challenged (detected with canes), hearing challenged (would feel the domes), physically challenged (mobility machines would detect), and even able-bodied people.

The Train Horn Rule (49 CFR Part 222) requires locomotive engineers to sound train horns at least 15 seconds in advance of all public grade crossings. The pattern must be repeated or prolonged until the lead locomotive or lead cab car occupies the grade crossing. So how does a locomotive operator who has made the same run many times become aware that a new (and possibly unguarded) crossing has been added to the route? Mr. Didelius of Columbia Rail explained that all crossings of a railroad must be formally approved in advance by the railroad. It usually takes a considerable amount of time for these crossings to be completed. Thus, the railroad has knowledge of potential new crossings that will be added and can broadcast the information to train operators. Also, train operators are responsible for constantly observing what is ahead in order to sound that whistle to comply with the Train Horn Rule.

Haley Bennet and Mark Lees, two Washington State University student landscape architects representing Team 4, were very excited to work on this project. Ms. Bennet was excited to learn from Jan Satterthwaite, a Principal Landscape Architect from Seattle. Mr. Lees was happy to get more practice for his chosen profession.

Many organizations were represented at the Charrette, to include but not limited to, the design firm of Anderson, Perry, & Associates, Washington chapter of American Association of Landscape Architects, National Park Service, Washington State University, University of Washington, and the cities of Dayton, Waitsburg, and Walla Walla.

The four teams presented different sections and aspects of the trail. At the end of the presentation, the public was invited to view the composite drawn from the four ideas and comment on their favorite parts of each idea shown.

The first team (Team 4) presented Storytelling and Educational Interpretations with five points of interest: Agriculture and Livestock History, Nez Perce Trail Crosses over Touchet Trail and history of Windmills, Mechanical (resources for food, health, and culture), Rail Line and Depot, and Birds of Prey. Also, this team presented illumination methods for use during darkened times.

The second team (Team 1) presented three zones: Waitsburg, Valley View, and Industrial (by the airport). This team included deciduous (trees that shed leaves annually) trees in their design with the rationale that in the summer the trees would provide shade; yet in the winter would allow sun to get through. Further, restrooms and bike repair areas, and shelters were shown.

The third team (Team 2) presented the Depot to Blue Mountain Station section. The Courthouse and Depot were mentioned as points of interest. This team explored a shared use on Commercial Street by building a retaining wall. A new word was taught, woonerf. This is a Dutch word meaning a road in which devices for reducing or slowing the flow of traffic have been installed. This team looked at opportunities that the Touchet Trail would connect to other existing trails, such as the levy trail and the golf course trail. They were aware this was not the focus of the immediate effort, but would be a future plan.

The fourth team (Team 3) was tasked with the rest of the trail not addressed by the other three teams, to include Dumas Station. It was emphasized that this property owner would be very cooperative in that wine and cheese stops would be included as a trail option. This team recognized that the trail would ebb and flow and cross the railroad tracks at some points. Also, the trail could have many points of interest for resting spots, views, and historical features. The trail would not be a straight shot, but there would be safe and manageable ways to cross roads. The team also looked at potential bridge crossings.