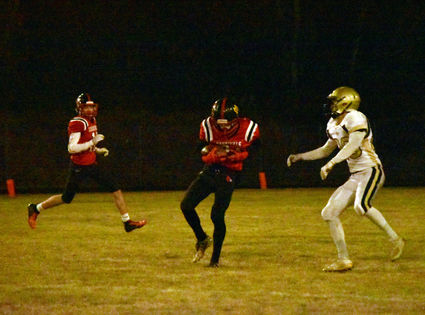 Tri-Cities Prep's offense got pressure from the line and defensive backs, the line hurrying the quarterback's throws and the D-backs stepping in front of Jaguar receivers. Here Dylan Bledsoe (21) intercepts a Dante Maiuri pass to stop a TCP drive.

"I think they tried to overlook us a little bit," said Dayton-Waitsburg Head Coach Troy Larsen. "Thinking they're going to rest up for the playoffs or something. And that's the wrong thing to do with a hungry team."

At the end of a long, winless season, Dayton-Waitsburg, through a combination of hard-learned experience from this season's nine games and the discipline and skill that comes from that, showed one of the league's better teams that a win in the Touchet Valley wasn't a given.

"I am super proud of these guys," Larsen said. "They've [Tri-Cities Prep] blown out everybody, except for the ones they've lost." TCP and Columbia duked it out Oct. 11 for the league crown, the Coyotes prevailing 34-28. Otherwise, TCP clobbered Liberty Christian 79-6; hammered Kittitas-Thorp 54-6; shut out Northwest Christian 43-0; whipped Mabton 48-14, and beat White Swan 49-26.

"So I said 'let's go after it. Let's shock them...let's turn this upside down a little bit, show them who we are,'" Larsen commented after the game. "You don't come into our valley and just walk away clean. I thought we fought pretty hard. I'm not happy because we still got an 'L,' but that one tastes a little bit better. We didn't let it get out of control."

Dayton-Waitsburg competed with the Jaguars, running up 239 yards of total offense to TCP's 324. Valley gained 131 through the air compared to the Jaguars' 150 yards, and TCP's 174 yards rushing eclipsed DW's 108. Freshman running back Hudson Reser sustained a concussion at Columbia and didn't play.

Freshman quarterback Monte Pettichord threw an 11-yard touchdown pass to Mason Finney and he also punched into the end zone from the three yard line for DW's other score.

"It was tough at times, especially when they're blitzing six, trying to pick it all up, but our quarterback did a good job," Larsen said. "The kid's 14 years old, a freshman, and he's flying around making some huge plays.

"On that last goal-line play, he changed it on his own because he saw where they were moving and they all left the 'A' gap and he just snuck it," he said. "That's years above where he should be, so I'm super impressed with Monte Pettichord."

Pettichord stepped into the quarterback spot midseason when Larsen was compelled to make changes because the offense was stagnant. "His arm will get stronger as he grows but he throws a soft ball; very catchable ball," Larsen said. "And he usually throws it to the right place. He's a fun kid to be around. He listens, he's coachable."

Defensively, Dayton-Waitsburg's game plan paid big dividends. "I'm so proud of them," Larsen said. "This team [Tri-Cities Prep] has just been blowing people out so for us to hang in like we did, I'm pretty happy."

Tayven Seney, DW's 6-1, 240-lb. defensive lineman, was giving TCP's 6-2, 215-lb. quarterback Dante Maiuri some pressure. "They were so scared of Tayven, he was getting double-teamed and he was still getting through every time," Larsen said. "That kid [Maiuri] was just hucking it. He's a pretty good quarterback if you let him sit back there and we weren't letting him.

"So, for Tayven, that's pure will," the coach commented. "That kid just fought through it, and then when they have to double team him, our other guys get a chance one-on-one to come off a little better. "

Larsen also had praise for Dylan Bledsoe, who was defending TCP's top receiver Landon Amato. "He did a great job against their best receiver," Larsen said. "He got beat on that first one because he was probably on his heels, knees locked a little bit, but he came right back and got a pick. After that I don't think his kid caught a ball, and that kid's catching 10-12 balls a game. I was pretty impressed with Dylan."

The defense stopped TCP cold near the end of the third stanza when the Jaguars were second-and-one on the 10-yard line. A run was stopped and two passes knocked down, DW taking over on downs

After Valley's opening kick-off, DW was yielding as TCP took big strides, moving about 50 yards in three plays, but there the Jags fumbled and DW recovered.

TCP held Valley after a short advance and DW punted. From their own 19 yard line, TCP was whistled for holding, then a false start and Seamus House tackled the Jaguar ballcarrier in the end zone for a 2-0 DW lead.

DW took the Jaguar punt and was in TCP territory when Christian Watson-Solis met up with Jaguar Owen Ritala, who stripped the ball, giving TCP possession. That drive ended seven plays and 57 yards later with a touchdown and a 7-2 TCP lead.

Valley Football put together an 11-play, 70-yard drive, scoring on a Pettichord to Finney pass from the 11. The PAT kick was wide but DW led 8-7.

Tri-Cities Prep scored on the next drive, Maiuri connecting with Amato on a 34-yard pass. The extra point was blocked by House for a 13-8 score.

The half ended after a DW drive was halted by a Jaguar interception, which Bledsoe quickly remedied with an interception of a Maiuri pass on the next play. DW's last-second passes fell incomplete.

DW's first drive in the third period went nowhere and the punt was high, giving TCP good field position. They marched the 46 yards in 11 plays, making the score 19-8.

Valley coughed up the ball on the first play of their ensuing drive, the Jaguars recovering, but here Dayton-Waitsburg stood firm, stopping TCP in four downs. Both teams battled in midfield as the third quarter ended, with DW advancing to the Jaguar 22 yard line on a nice Pettichord to Bledsoe reception that covered 28 yards.

DW's momentum was tripped up by the change of quarters and their drive bogged down. TCP put together a nine-play, 71-yard drive, scoring on a pass to Levy with 7:13 to go and a 27-8 lead.

Dayton-Waitsburg's next drive was textbook. Adam Puckett returned the kickoff 10 yards to the DW 37 and Pettichord threw to Bledsoe for a nice seven-yard reception. Watson-Solis punched out three yards for a first down.

On second and ten, Pettichord lofted a pass to Finney, who made a leaping catch, gaining 16 yards and advancing to Jaguar territory. A pass to Colton VanBlaricom was caught but tackled behind the line of scrimmage. On second and 16, Watson-Solis chugged up the right side to daylight and was angling for the end zone when Kaden Harrison made a touchdown-saving tackle for TCP on the seven.

Watson-Solis moved it two yards, Tayven Seney, from the line in as fullback gained another few yards, then Pettichord, reading the defense's shift, plunged in from the three. Bledsoe's kick was good and the score of 27-15 closed out scoring. 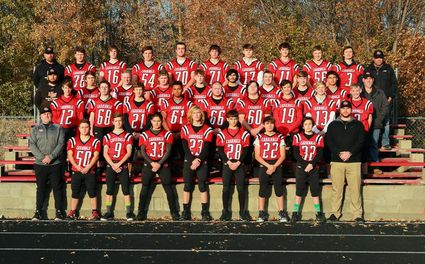