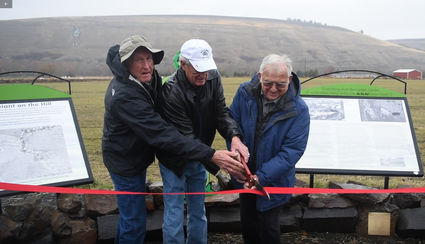 DAYTON–Visitors and passers-by traveling Highway 12 will now be able to learn about the Green Giant Company's decades of impact on the Touchet Valley, and get the story behind the 300-foot tall Green Giant on the hill.

The trio who cut the ribbon, Mann, Dunlap and Richter, were instrumental when the first Giant was "etched" on the hillside, about a half mile west of the present location, by broadcasting grass seed and fertilizer to make the green vegetation create the iconic symbol.

"In the spring it was good because the grass was really green, but it wasn't so good because you couldn't see it year around," Nealey said. The outline was made by Giant regular Gale Davis sighting through a three-inch decal on a pickup window at the highway, and directing the three men on the hillside by walkie talkie.

Later, the Green Giant was moved to its present location, he said. In 1993, it was decided to use blocks to accentuate the Giant's outline and fill in.

Thousands were placed by Dayton High School students, thanks to the involvement of principal Van Cummings, who with wife Anita, attended the ceremony.

Another person, Gary Lowe, was instrumental, Nealey said, crediting Richter, Dunlap and Mann for keeping the image maintained, along with Lowe and Kay and Noella Cardenas. "They were a big, big help," Nealey said.

Lowe also arranged to put solar-powered lights around the Giant to enable it to be seen at night.

Nealey, about five years ago, was serving in the House of Representatives, and Lowe approached him about putting a highway pullout so people could stop and see the Giant.

"Right before I retired from the Legislature, I asked the Department of Transportation if they could help us do this, and they were super cooperative about it, all the way through the process," Nealey said. Local DOT personnel put a lot of time and effort into building the pull out. Nealey thanked Jerrod Dahl, Larry Batterson from Walla Walla and Duane Straub of Dayton.

He also thanked the Port of Columbia because the pullout encroaches on Port property. "They were very willing to provide it," he said, acknowledging Port Executive Director Jennie Dickinson. He thanked Economic Development Director Kathryn Witherington for helping set up the event.

Nealey also thanked the Dayton-Columbia County Fund for paying for the signs and the decorative rock totaling about $4,000-$5,000. "They were super," he said. "They really got engaged and passionate about the Green Giant," Nealey said, pointing out that each leaf on the Giant's vest is individually welded. He credited Dunlap for extensively researching information for the signs, and the assistance of Ginny Butler in helping craft the text.

Paula Moisio from the Blue Mountain Heritage Society helped with funding, and Bob Hutchens and Will Hutchens helped providing the truck and excavator to haul the rock to the site. Local artist Paul Strohbehn was enlisted to place the rocks in an attractive manner. "We couldn't figure out how to make it look good," Nealey said. "He made it look great."

Nealey also recognized Warren Family Farms for permitting the Giant to be located on their hillside property. Glenn Warren was in attendance.

The dedication continued at the Co-op Market at Blue Mountain Station where Nealey reviewed the history. The Minnesota Valley Canning Company started in 1903, processing peas, and discovered a "big and kind of ugly pea," which in 1925, the brand "Green Giant," and the symbol are developed.

Dayton's plant was built by Blue Mountain Canning Co. in 1934, and merged with Minnesota Valley in 1947. "That's when the Green Giant really started in our community," Nealey said. There were also canneries in Pomeroy and Waitsburg.

John Huber, owner of Huber Action Freight, expressed his appreciation for the work his company receives in the area, and spontaneously contributed $500 to Nealey to further the project. "That Green Giant means a lot, to a lot of people," Huber told Nealey.

"This is bigger than just Dayton," Nealey said. "We really need to memorialize it and put the history out there for people to see."

"Counting those two down by the drive-in theater and this one, I think I made six trips up on that hill," said Lowell Ricther. "I'm not going up anymore."

Randy Mann said they used stakes and surveyor's tape to create the outline, and mentioned the help of Gale Davis, Jerry Webster and Jack Groom.

"We parked my pickup in the roadside, in the ditch and put a three-inch decal in the window," Mann said.

Mann sent pictures and information regarding the Giant to the Green Giant Reunion held in Montgomery, Minn. He said two other locations, LeSueur and Blue Earth, Minn., also have giant Green Giants watching over their respective valleys.

Dunlap's father was a career Green Giant employee, then his son followed with a full, 36-year career with the company, beginning in 1966. Dunlap was personnel manager, and was involved in recruiting up to 2,000 employees per year. 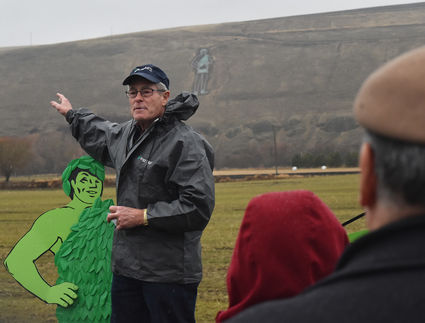 Employees were recruited from Texas, and contract employees from Mexico, many of whom became U.S. citizens, Dunlap said. Other areas of recruitments were Puerto Rico, British West Indies, Arkansas, Pine Ridge and Rosebud Indian Reservations from North Dakota.

The local plant was later sold to Pillsbury and eventually Seneca, which owns and operates the facility as a seed processing plant to this day.

Dunlap believes the cost of labor and lack of interest in canned asparagus contributed to the eventual closing of the plant.

R & B Foods in New Jersey owns the Green Giant symbol and copyright, and the jingle, and Nealey obtained permission from the company to use the images at the site.