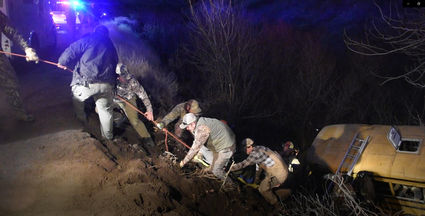 Fire fighters, police and others help hoist accident victim Troy A. Bird from the ravine, up to the roadway and the waiting ambulance. Bird and driver John H. Alberts received injuries in the mishap.

DAYTON–A converted school bus traveling down Hartsock Grade east of here left the roadway and rolled once, prompting emergency personnel to respond to remove the passenger and driver. 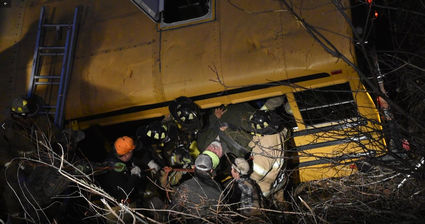 Transported to Dayton General Hospital was Troy A. Bird, 47, of Burbank, Wash., and the driver of the 2009 Chevrolet Express, John H. Alberts, 59, also of Burbank.

The converted school bus left the steep roadway and rolled down hill approximately 50 feet at about 3:40 p.m. The driver and passenger, according to the incident report from the Columbia County Sheriff's Office, were trapped inside the vehicle. Bird, who is a quadriplegic, was trapped within the vehicle, upside down.

Emergency personnel gained access to the interior of the bus, which was lying on brush in a deep ditch, through a ceiling hatch. Window frames were cut out to allow the accident victim Bird to be passed through the opening, and fire fighters, police and others helped pull the victim out of the ravine to the ambulance.