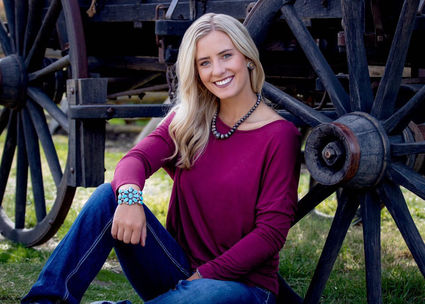 Dayton native Josilyn Fullerton was announced as Queen of the Pendleton Round-Up last weekend. Fullerton, a 2018 Round-Up Princess and 2016 Walla Walla Fair and Frontier Days Queen, grew up around rodeo and livestock and pledges to "give back" as she and the 2020 Round-Up Court also promote "Farmers Ending Hunger" while traveling the country representing the Pendleton Round-Up. A few years ago, she and Princess Kaleigh White, left, were Junior Rodeo royalty and "kind of joked" about someday being on the Round-Up Court together.

PENDLETON–Dayton will be well-represented on the royal court of the Pendleton Round-Up with 2017 Dayton High School graduate Josilyn Fullerton being named the 2020 Round-Up Queen, and 2019 D.H.S. grad Kaleigh White selected as one of four members of the Round-Up court.