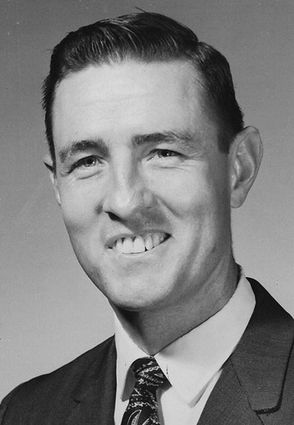 Long-time Dayton resident, John Robert Harris, 92, passed away peacefully on Friday the 13th at the Parkview Memory Care unit of Wheatland Village in Walla Walla, where he had resided since 2015. After a ten-year battle with progressive Alzheimer's dementia, his spirit has finally been set free. We are so thankful for all the care and support John received at Parkview during his final years.

John was born in Oklahoma in 1927. When the Dust Bowl hit in the early 1930s, the family loaded up a 1925 Overland touring car and headed west, settling in Idaho. John graduated from Bonners Ferry High School in 1945 and signed up with the Army Enlisted Reserve Corp. In 1946, he entered active duty and was sent to San Antonio, Tex., for training as a medical tech, then was deployed to Japan as part of the post-war occupation forces, where he earned his parachutist badge. John was very impressed with the Japanese people and would often comment on the warm welcome he received.

After discharge, John returned to the Pacific Northwest and worked with family members at the Black Warrior Mine near Stehekin, Wash. Thanks to the GI Bill, he went to college and graduated from the University of Idaho in 1951 with a B.S. in Education. Around that time, John joined the Forest Service as a Smoke Jumper, and later worked as a Lookout and crew member during summer breaks.

While living in Orofino, Id., he met Leah Jane Lamoreux. They were married in 1954 and then moved to Dayton.

John started as a school teacher and did double duty as school bus driver ... not only did he instruct his students, he rounded them up every day! John continued his own studies, earning his Master's in Education from Eastern Washington State College in 1966. He then became the principal of Dayton High School, concurrently giving years of service to DHS Student Body activities, until his retirement in 1984.

John was always active in the Methodist Church. After retiring, he worked on several projects as a volunteer with Habitat for Humanity. John and Leah also did some traveling, driving to California and Arizona to visit their sons, and to many memorable family reunions in Oregon, Idaho and Washington, especially Eckler Mountain.

However, they were most content to be home in Dayton, where they were blessed by connections with extended family members (thank you all - Dallas and Mike, Lois and Ray, Jennie and Jay, Abbie and Greg, and more). John also received help from the community as his memory began to fade and he was beset by evil scammers who prey on seniors.

Thank you to all the folks from the congregation, the bank, the courthouse, the sheriff, and others. John will be remembered as a gracious, kind and honest yet disciplined and practical man. A tune comes to Diana's mind, concluding this short review of a life well lived ... "And in the end, the love you take, is equal to the love you make!"

John is survived by his wife of 65 years, Leah (who continues to reside at Parkview Memory Care), brothers Oliver and Thomas, sons Kelly (+ daughter-in-law Diana) and Joe (+ daughter-in-law Mary Leigh), and granddaughters Paige and Jaime; as well as Joe's ex-wife Jaris, and grandsons Craig and Adam. John was preceded in death by father Wendell, mother Olive "Ollie", sisters Frances and Susan, brothers Howard and Kenneth.

Funeral services will be held at Dayton United Methodist Church, 110 S. Third Street, on Friday, January 3, 2020, at 11:00 a.m. A committal service will follow at the Dayton City Cemetery and then return to the church for luncheon in the Fellowship Hall. Reverend Linda Weistaner will officiate.

Memorial contributions may be made to The Club in Dayton through the Herring Groseclose Funeral Home, 315 West Alder Street, Walla Walla, WA 99362.