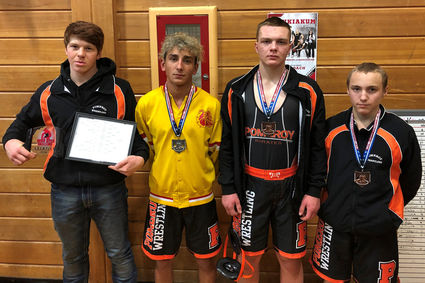 Four wrestlers brought home the hardware after competing in the Down River Challenge last Saturday. From left, Braedyn White, Carlos Norris, Will Winona and Nick Hastings all received medals or top awards, White taking first in the 170-lb. division and Norris finishing second in the 138-lb. class.

"We made a long journey to battle the west side and brought home some hardware," commented Head Coach Ben Slaybaugh. "It was a good day and these guys should be proud."

Norris, a Dayton High School senior who wrestles with the Pomeroy team, finished in second place with a third-match loss in the 138-lb. division. Norris pinned K. Schink of Warrington in 1:54 in the opening round, then won against D. McCall of Knappa H.S. of Astoria, Ore. In the medal round, Norris was pinned by P. Webster of Columbia-White Salmon.

White captured the first-place trophy in the 170-lb class with three straight pins, the longest taking 2:51 in the third match. White dispatched J. Nickerson of R.A. Long High School of Longview, Wash., in 1:32. He next faced J. Nefuser of Warrington, winning by fall in 2:47. In the third match, he defeated W. Fruh of North Beach H.S. for the trophy.

Wrestlers Nick Hastings, in the 132-lb class, and Will Winona, in the 182-lb division, both finished fourth and "wrestled their guts out against some stiff competition," Slaybaugh said.

Winona quickly handled A. Wolf of Life Christian Academy in 25 seconds in the opening match. He defeated E. Niles of Raymond but lost to T. Berntsen of Clatskanie, Ore., to shift to the consolation bracket. There he pinned D. Hollingsworth of Ocosta H.S., Westport, Wash., but lost by 10-0 decision to E. Haynes of Kalama.

Pirate 132-lb. freshman Nick Hastings also won three matches and lost two for fourth place. He pinned M. Morrow of Ocosta in 2:07, then beat R. Melina of Warrington in 1:32. D. Thayer of Napavine pinned Hastings in 35 seconds. Hastings rallied with an 8-6 decision over J. Morey of Knappa and finally was pinned by J. Tucker of Kalama H.S., Kalama, Wash., in 1:42.