There must be something in the water 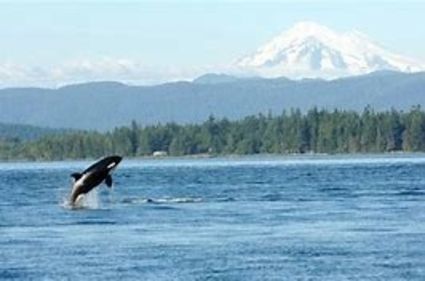 It's about little Home, Washington, a Pierce County settlement near Van Geldern Cove, now populated with get-away beach homes. But in 1897, three men bought 26 acres for $7 an acre on terms: $20 down and money raised by digging clams and selling timber.

Interest grew and more families moved there, and eventually, a newspaper was started. The New Era wasn't so much about informing local subscribers about world events, but more about informing the world about Home, Washington. According the Gibson, the newspaper's "primary point was free love," an attitude which attracted all kinds of "crackpots" to the colony.

Things went along in this secluded corner of Puget Sound until President William McKinley was assassinated by an "anarchist" in 1901. Now that word took on a new meaning and little Home came under closer scrutiny.

Vigilantes from Tacoma organized to take care of things, but the local ferry captain, who knew the folks in Home to be "basically peaceful and industrious," quieted the mob. A minister observed Home and found the inhabitants to be "sober, industrious and friendly."

Leave it to an assassin to give anarchy a bad name.

A couple more newspapers were in business, printing stories of a sexual nature, and usually ending with the editor's arrest. Back from court, the editor often changed the name of the newspaper and kept going with the same subject matter. One newspaper was called the Demonstrator," another "Clothed with the Sun."

Eccentric people were attracted to Home. A "Professor Thompson declared that the world would never reach perfection until all people wore women's clothing, since it was aesthetic and comfortable. Someone opened a school that taught Esperanto. Someone else taught a class in Hatha yoga. A woman named Laura Wood lived in an Indian wigwam. College professors studied he colony and wrote learned papers. Moses Harmon, editor of a paper called Lucifer, came to Home after several stints in Illinois and Kansas prisons. Those sentences were served for advocating contraception in his paper."

This utopia began to show cracks. Residents had divided into two groups, disagreeing over land ownership. The settlement was dissolved and individual deeds for each member's two acres were awarded. Taking advantage of low land prices, some farmers bought land, although they didn't like that "some members of the colony, men and women both, were bathing naked together."

It was true. Members of a Russian faction, in whose native land it was traditional to bath together, would strip in their home and hike to the beach to bathe. Eventually, two men and two women were arrested for indecent exposure.

The case hit the courts when Agitator publisher Jay Fox ran a July 1, 1911, editorial entitled "The Nudes and the Prudes." People who love their freedom should reject those bringing charges against the nudists, Fox asserted. The only things Home did not tolerate was intolerance.

Where have we heard that?

Fox was tried and found guilty, fined 60 days in jail. The State Supreme Court upheld the conviction and the U.S. Supreme Court refused to review the case.

This peek at some zaniness from Washington's past underscores some of the wackiness that pervades certain areas of our nation. Certainly, western Washington does not have a lock on it but sometimes we wonder.

We recall, however, former president Obama's mother was a Bainbridge Island resident, her family said to have moved there because the principal at her high school was an avowed communist.

There must be something in the water.

Don't know but this might be some explanation for the differences we've observed of people from one side of the state, compared with the other...why our governor pushed for a $750,000 study of the Lower Snake River Dams.

Does Jay Inslee really want to cut off one of Washington's strongest economic "legs"? There's something seriously wrong with that picture.