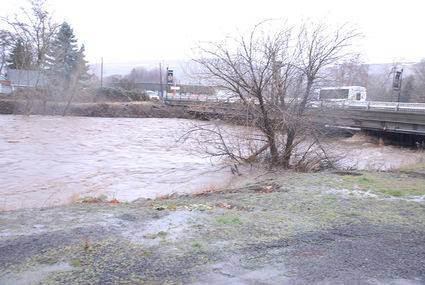 Fast-moving runoff burbles against the stanchions of the Main Street/State Route 12 bridge over the Touchet River Thursday afternoon, coming within a few feet of the base of the bridge. Steady rainfall the past few days and rising temperatures has raised river levels on the Touchet River and Patit Creek, prompting Columbia County Commissioners to prepare by declaring a state of emergency. Approximately the same volume was running at about 10 p.m. February 6.

DAYTON–Columbia County Commissioners called an emergency meeting today, Thursday, February 7, at 3:30 p.m., and declared a state of emergency for the area due to weather conditions, warm temperatures and rising river arterials. 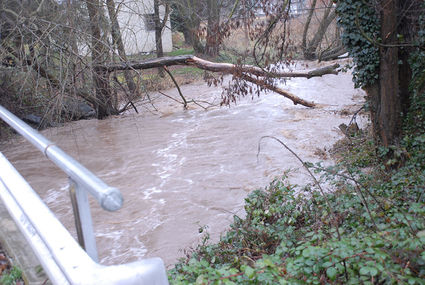 A burbling brook most of the year, Patit Creek was ripping right along Thursday, February 6. City crews and County emergency personnel were keeping a watchful eye on the rushing waters as a weather system of intense precipitation crawled through the region.

The emergency meeting was initiated due to the copious amounts of rain, with more expected in the next two days and the present level of water in the Touchet River and Patit Creek.

This announcement serves as a formality to allow any necessary action that becomes needed to be acted upon more quickly. A second emergency meeting was discussed for tomorrow, if needed. Presently, the only action being taken is making ready the use of 2 pallets of sandbags from Public Works that are on hand.