Did Dayton pioneer survive the Battle of the Little Bighorn? 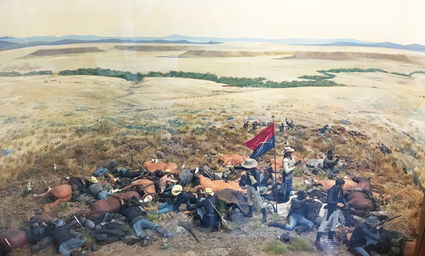 This painting hangs in the Custer Battlefield Interpretive Center near Crow Agency, Montana. The late Frank Finkel, one of Dayton's early pioneers, contended that he was a survivor–perhaps the only survivor–of General George Armstrong Custer's 7th Cavalry.

DAYTON–Was the late Frank Finkel, who arrived in Dayton in 1878, two years after the infamous "Custer's Last Stand," actually a survivor of the battle? That topic was the subject of a talk given by retired park ranger Gary Lentz at the Blue Mountain Heritage Society's 12th Annual Ground Hog Dinner f...