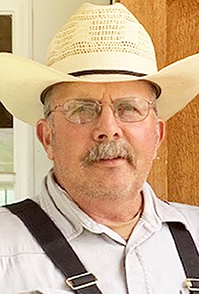 DAYTON–A Tucannon district agricultural producer has thrown his ballcap into the ring by filing as a candidate for Columbia County Commissioner for District 2. Marty Hall will challenge incumbent Mike Talbott for the elected position.

I’m excited about it,” Hall said. “There will be a sharp learning curve, but that’s okay, we’ll get it.”

Hall is running not only because he’s interested in serving, but because a number of people he’s acquainted with have been suggesting he would make a good commissioner. “Several people have asked me to file the last two or three years and I decided to do it,” he said.

If elected, Hall anticipates several challenges, and he said he’s looking forward to addressing them.

Another problem facing Columbia County, Hall said, has been around for years: drugs. “Columbia County is a wonderful place to live,” Hall said. “But we’ve got a huge drug problem. I don’t know what the answers are, but we have to work toward the solution.

Hall points not only does substance abuse harm the addicted person or user, but there’s also damage to families and crime victims.

“It’s a huge problem,” Hall said. “When you look at broken families, generally there’s drugs in there somewhere.”

Hall acknowledges that he’ll have a learning curve regarding the County Budget. “That’s the area, honestly, that I have the most homework to do on,” he said. “I know math, and I know we have to use black ink on the county budget. I’m not so naive that I don’t recognize that a big part of the job is dollars and cents, the purse strings.”

Encouraging is the employment that’s resulted from the wind projects and pulp plant, Hall said, which helps the county by bringing good, family-wage jobs to the area. “I hope more people move here,” Hall said, commenting that the industries are “a step in the right direction.”

“I would love to think if elected and serve a couple of terms, that the morals in this county would be in a better spot than when I started,” Hall said. “That’s one of my main goals–I want to see stronger families.”

Hall’s hometown is nearby Prescott, where he graduated from high school in 1982. He attended Washington State University for a time, then worked out of town for about a year before returning and being employed by Pat Barker near Lyons Ferry. Since 2001, he’s been farming in the Tucannon, “raising cattle, wheat and kids,” he quipped.