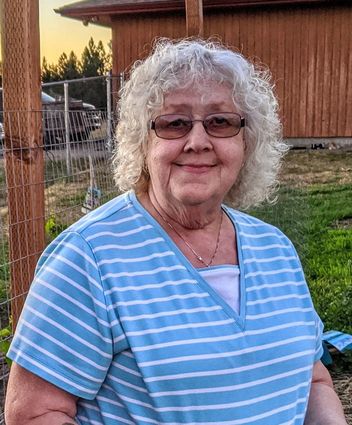 Della was born to William and Hazel (Bishop) Hilgert on February 20, 1944 in Dayton, Wash. She grew up in there with her three siblings and graduated from Dayton High School in 1962. Soon after graduating, she married Robert Henry Hill whom she'd met in high school on June 9, 1962. They made their home at Huntsville near Waitsburg where she kept busy as a homemaker and mother.

A few years later they moved to Ewan near Rock Lake in Whitman County and Bob worked for area farmers. They lived in Cheney briefly where she worked at Eastern Washington College and for a time in Spokane before moving to Rosalia in 1973. She was excellent with clerical skills and worked as the high school secretary as her kids were growing up and in school.

She worked as a court clerk for Whitman County, and for several years she worked as the City Clerk for Rosalia, later in Oakesdale, Wash., and finally in Albion, Wash., before retiring in 2010. She also covered as an assistant postmaster in Oakesdale at one time.

The family enjoyed going camping and travelling, including trips to Mexico and Canada. Della was always looking to help other people and was a sweet lady through and through. She was a member of the Gifted Grannies in Rosalia, the Dayton Christian Church and the Rosalia CommUnity Church.

Della was very talented with crafts and loved sewing, making dolls, doll clothes, painting and knitting. Her gift of helping others continued through her life and up until the night she died.

Della was preceded in death by her parents; two sisters, Leora and Lena; and her brother Carl.

She is survived by her husband of 58 years, Bob, at their Rosalia home; three children, Mike (Lisa) Hill of Spokane, Kris (Dan) Karr of Ocala, Fla., and Suzanne Hill of Rosalia; eight grandchildren and 10 great-grandchildren.

Graveside Services will be at the Dayton Cemetery on Thursday, September 17, at 2 p.m. A Memorial Service for Della is planned at the Rosalia CommUnity Church on Saturday, September 19, at 2 p.m.

The family suggests memorial gifts be made to the Gifted Grannies Club or the Rosalia Fire Department. On-line guest book is at http://www.bruningfuneralhome.com

Bruning Funeral Home of Colfax is caring for the family.