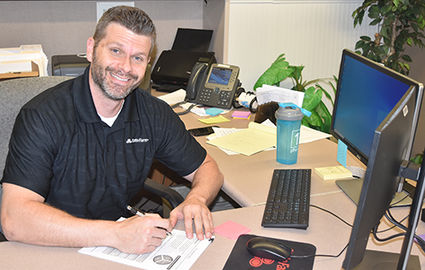 DAYTON–Walla Walla State Farm Agent Mike Stensrude took over operation of this city's State Farm Agency on August 1, and has been over-the-top busy ever since.

In addition to his Walla Walla agency, the former Lewiston, Id,. resident accepted the challenge of managing the Dayton location until a successor to Crothers is named. The new agent is scheduled to take over in Dayton on March 1, 2021.

"While the workload has increased significantly, I have been blessed to work with two amazing teams," Stensrude said. "The dedication, compassion and work ethic of the Walla Walla office and the Dayton offices have made the increased work go smoothly. I can't imagine doing this without them and their support. I'm beyond proud of how everyone has stepped up."

Stensrude's job is to "maintain the status quo" until the new agent comes on board.

"Bette Lou's agency had such a good reputation for its top-notch customer service," he said, "it's my job to make sure it stay on par with what people are used to."

Stensrude had high praise for Diana Ashley and Angela Black and their high level of teamwork. In his Walla Walla office, Stensrude employs Kyra John, the daughter of Dayton residents Rob and Karla John.

The Minnesota native has been with State Farm about four years, joining the company as a producer in the Lewiston-Clarkston area. His abilities "fast tracked" his career when long-time Walla Walla agent Liz Conover retired and Stensrude went through the application process to assume that agency.

He currently is on the Walla Walla Exchange Club Board of Directors.