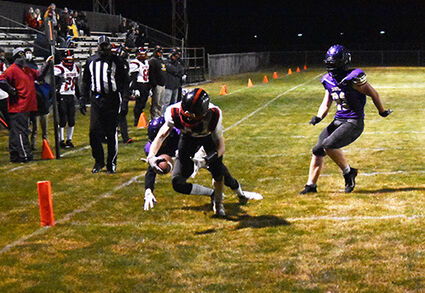 Wolfpack wide receiver Mason Finney (16) pulled in a pass from Monte Pettichord then fought his way to the goal line for Dayton-Waitsburg's only touchdown in last week's 54-6 loss to Columbia-Burbank.

BURBANK–From Columbia's first touchdown on the second play of the game, a 55-yard ramble by Abraham Garcia, the Wolfpack had the feeling it was going to be a long night. The Coyotes stomped on the gas pedal and didn't let up as they scored 35 points in the first quarter on their way to a 54-6 win over Dayton Waitsburg here last Thursday, March 25.

"We had a really hard time picking up their f...