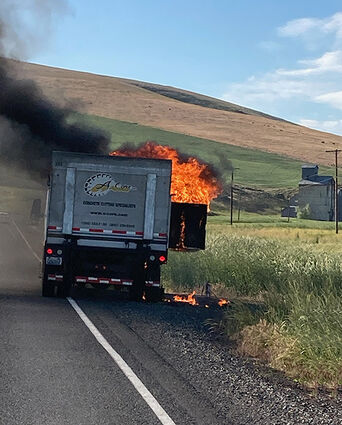 POMEROY–The Garfield County Fire District No. 1 responded to a fire of a single vehicle that had been eastbound on State Route 12 at mile post 394 on May 24, 2021 at around 7:30 a.m. The fire was contained to the Concrete Cutting Company A-Core Concrete Specialists truck and did not spread to the grass, according to Garfield County Fire Chief James Cleveland. The vehicle was carrying gas, diesel, and hydraulic fluid which made it difficult to extinguish. "Brush 1, Brush 2, Brush 3, Brush 9, Engine 10 and Rescue 5 responded with a total of 15 personnel," Cleveland said. "In addition, a water truck from Pomeroy Grain Growers responded and provided additional water."