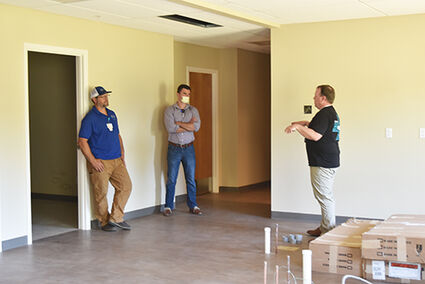 DAYTON-The Columba County Health System (CCHS) $420,000 Dental Clinic project is nearing completion under Nelson Construction and is scheduled to open this month. The space will have the medical equipment installed this week.

Two dentists will be serving Medicaid patients. One is local dentist Michael Strang who will be devoting Thursdays at the new clinic. The other who will be announced soon is someone who has experience with Medicaid and in particular working to get patients in to be seen who might not otherwise make their appointment. One approach CCHS will implement is the use of Community Health Workers to connect to patients before appointments to make sure arrangements are made to ensure they can get there and be seen. They can also aid in keeping current on individual Medicaid insurance requirements.

According to McGuire, the project couldn't have been completed without the help of Rude and Representative Mike Steele because of unanticipated additional costs of materials and the travel cost of the contractors. McGuire said, "When we started this project, we had budgeted around $250,000 to $300,000 for it. But as we got closer to project, the bids were coming in anywhere from $380,000 to $500,000 to do it...it was going to kill the project. So being able to talk to Skyler and Rep. Steele, they were able to fund an additional $150,000 for the project. It really made the difference, it would have been a shortfall for the Health System to have to absorb."

Rude said, "I think this is great. It's beautiful on the inside and outside."

McGuire spoke to Rude about coming for the formal ribbon cutting ceremony later this month. The date is yet to be determined.