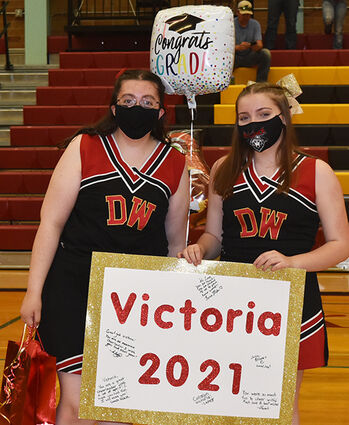 Cheer Squad Senior Victoria Rapoza was joined by fellow cheerleader Laney Crowe as Rapoza was applauded by the audience in Senior Night ceremonies. Rapoza fondly recalls being named to the Cheer Squad and her cat Tink as her favorite memories and her future plans include learning more and someday working with animals. She especially thanked Tink, her family and her best friends.

DAYTON–Four Dayton-Waitsburg boys basketball players and one DW Cheer Squad cheerleader were applauded by those attending the final home basketball game here June 11, and the four senior boys represented the two Lady Wolfpack seniors in absentia due to a COVID-19 detection on the girls team that resulted in the final two games of the season being canceled.

Girls basketball players were in qua...