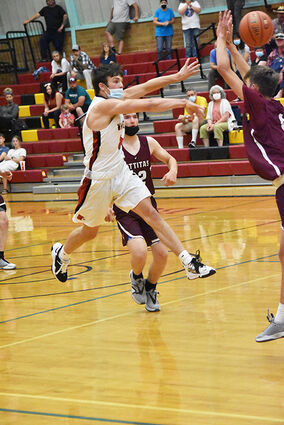 Flying through the air with the greatest of ease, Wolfpack guard Colton VanBlaricom dishes to a player in the key in action from DW's 50-38 League Tournament win over Kittitas on June 16. The Wolfpack lost to Cle Elum-Roslyn and White Swan to finish fourth.

DAYTON–Wolfpack Boys Basketball finished fourth in the Eastern Washington Athletic Conference league playoffs after kicking the eight-team tourney off with a 50-38 win over Kittitas on the home court, then dropping the quarterfinal at Cle Elum 62-37 and losing the consolation final to White Swan 56-36, back at home.

Columbia-Burbank eked out a 58-57 win over Cle Elum to win the tournament, se...