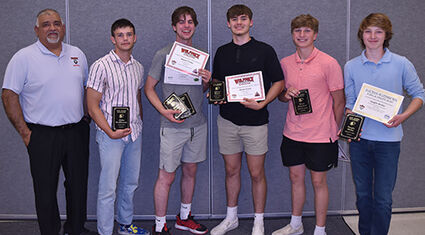 Receiving recognition following the 2021 covid boy's basketball season were Head Coach Roy Ramirez and five of his charges from the recently concluded season. Ramirez was honored as EWAC-East Coach of the Year and credited his team for bringing excitement back to Dayton-Waitsburg basketball. Next to Ramirez is Coach's Award recipient Colton VanBlaricom; Mason Finney, who received Most Valuable Teammate, First Team All League and Coach's Award; Shawn Evans, who received a Coach's Award and First Team All League; Mr. Defense Monte Pettichord; and Vaughn Walter, Mr. Hustle. Not pictured: Wyatt Costello, who was named All League Second Team, Coach's Award and Most Improved Player.

"It will be the first and last Winter Sports Banquet to be moved inside on account of he...