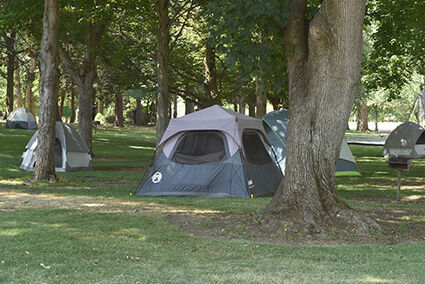 Firefighters' tents sprouted in the Dayton City Park as fire crews in the area to battle the Green Ridge Fire landed in Dayton. This group is using the high school gym for briefings, the art room as a command center, and office for its copiers and etc.

DAYTON–Several fires were started in the Blue Mountains by a July 7 thunderstorm that crackled across the region, and firefighters working on one of them, the Green Ridge-Turkey Tail Fire, about 20 miles from here and some 30 miles from Walla Walla, are making Dayton its base of operations.

As of deadline Tuesday, July 13, the Green Ridge fire was about 338 acres and 10% of its perimeter contained, according to the InciWeb, the multi-agency source for fire information. On July 11, the fire's size was 175 acres.

The wildfire is burning timber, timber litter and understory and short grass with active torching.

A high-pressure dome over the Pacific Northwest will cause hot conditions and hot temperatures this week, with gusty winds from the south on Tuesday shifting to northwest Tuesday night.

Fire officials estimate the fire will be contained by August 9.

The NW Team 7, consisting of 260 personnel, is fighting the fire, under the leadership of Incident Commander Jason Loomis.

Their stated goals as of early this week is to establish anchor points, protect structures and scout opportunities for line to the east side of the fire, plus continue line building on the southern flank.

Due to the recent spate of fire, the Pomeroy Ranger District of the Umatilla National Forest is closed to the public on July 11, by order of Eric Watruc, Forest Supervisor.

Dayton Public Schools are being pressed into service by the incident team, according to Superintendent Guy Strot.

Tents have popped up in the Dayton City Park and on school grounds. Initially, the team was using the high school gym's locker rooms for showering, but support facilities such as a portable kitchen, mobile showers and other facilities have deployed to Dayton. 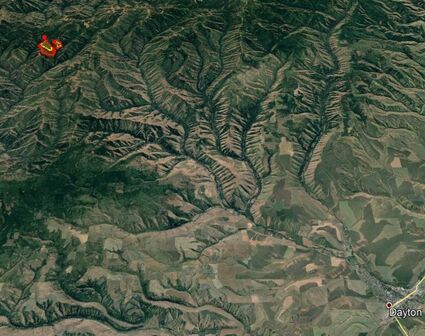 The Green Ridge-Turkey Tail Fire was sparked by a passing thunderstorm on July 7, and was at 338 acres as of Tuesday, July 13, with an estimated 10% of its perimeter contained, according to the USFS. This depiction shows its relationship to Dayton.

The Incident Command is using the gym for group briefings, and is in the art room for its base of operations, and other classrooms as needed, Strot said.

Fire crews may be here four or five weeks.

Another fire nearby is the Lick Creek (Dry Gulch) Fire, located southwest of Clarkston and southeast of Pomeroy, approximately two miles southwest of Asotin. As of Tuesday, it was 58 acres and 20% contained with 674 personnel on the fire, including 54 engines, 12 dozers and 21 water tenders. It also started July 7 by lightning.

Fire behavior moderated Monday although activity did pick up overnight in the southern portion of the fire. Tuesday and into Tuesday evening, the fire was expected to continue moving along the surface in timber primarily towards the South and West. Firefighters will continue preparing and reinforcing containment line on the east and west flanks, focusing on limiting the southern spread of the fire. Air operations will continue to support these efforts.