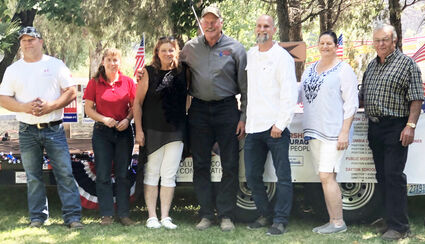 Candidates Johnny Watts, Korinda Wallace, Cindi John, Franklin County Commissioner Clint Didier, Seth Bryan, Laura Aukerman and Jack Miller joined about 100 Patriotic picnic goers for the Patriot Picnic in the Park Saturday, July 24. Each met the public and explained their positions and what they will bring to the community of Dayton.

DAYTON-About 100 citizens attended the Patriot Picnic in the Park on July 24 at the Dayton City Park. They met up for a "Meet and Mingle" with the candidates supported by the local political organization Columbia County Conservatives (CCC). Members from the Columbia County Republican Central Committee and Common-Sense Conservatives from Walla Walla also attended.

The event featured several of...