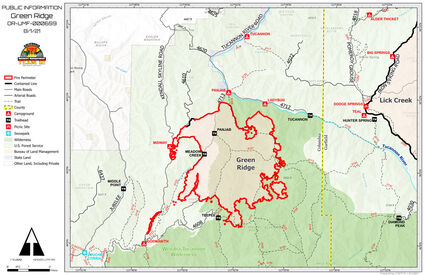 COLUMBIA COUNTY–Oregon Umatilla Forestry (ORUMF) reported that firefighters continue the fight to contain the ongoing July 7, 2021, lightning strike Green Ridge Fire. According to the ORUMF, crews recently contained a twenty-two-acre spot fire on the west side of the 46 Road about two miles north of Godman Trailhead. Every effort is being made to protect the numerous assets at risk which include Mill Creek Municipal Watershed, plantation reforestation sites, sensitive plants, recreation areas, fisheries, numerous cultural, archaeological, and historic sites, farming, agricultural lands, a RAWS site and a repeater site.

Secondary control lines are also being established by improvement of existing roads, trails, and natural terrain features. Structures at the Historic Godman Guard Station and Fire Lookout are being protected through the use of protective fire wrap.

Fire crews have been working diligently over the past few weeks to bring the Lick Creek fire under control. With the recent storm Saturday, July 31, 2021, the area experienced 0.12" of rainfall which aided in the continuing firefighting efforts. With the exception of a small, six-acre spot fire which was fought aggressively and quickly, the area is now 90% contained. Crews will continue to mop up pockets of heat interior and patrol the perimeter until full containment is achieved. A Burned Area Emergency Response team continues its efforts for the fire. The team's work will allow for long-range forecasting and preparation of mitigation measures in areas where the risk of runoff and flooding can take place. Level 1 evacuation remains in place in Garfield County.

All Forest Service lands, roads, and trails in the Umatilla National Forest are closed.