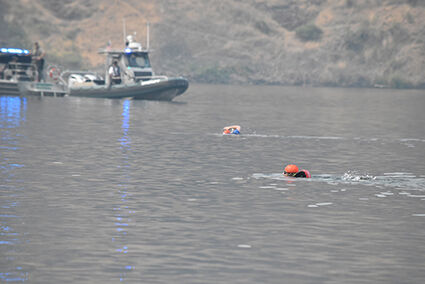 The youngest Swim the Snake participant, Dimitry Truesdale of Spokane Valley, Wash., was part of the second flight of 10 swimmers to cross Lake Bryan which lay between Lyons Ferry State Park and Lyons Ferry Marina and KOA. Each participant received a Swim the Snake T-shirt when they touched land and checked in as completing the swim.

There were 30 participants, which included a 16-year-old male youth from Spokane Valley, Wash. who challenged Lake Bryan, the approximately one-mile gap reaching under the Highway 261 bridge that spans from Lyons Ferry State Park to the Lyons Ferry Marina and KOA. 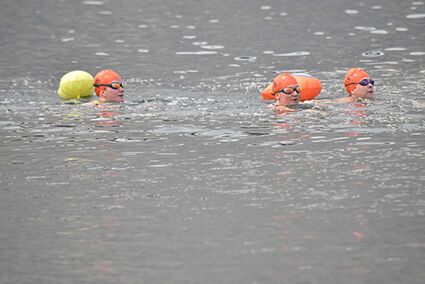 The event was a fundraiser, and proceeds will be donated to area swim teams and Blue Mountain RC&D Council, the organization which sponsored the event.

Swim the Snake is not a race. Swimmers were released in three groups, 10 per flight, starting their quest across the wide-open waters while kayakers, paddle boarders, boaters and the patrol boats from the Columbia, Garfield and Franklin county sheriff's secured the area and watched for any indication of swimmers in distress.

A number of swimmers turned around at the Marina breakwater and returned to the park. Boaters and onlookers joined the participants upon their return to Lyons Ferry State Park for congratulations and to recount the experiences of their swim across the Snake.