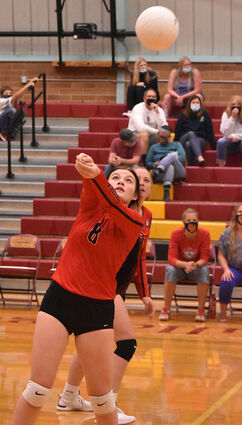 With her eyes on the ball, Dayton-Waitsburg's Kylee Henry (8) receives a pass from over the net in the Lady Wolfpack's first home match of the season against Walla Walla Valley Academy last week. Henry counted two assists and a kill in the match, lost by DW in three sets.

DAYTON–In the Lady Wolfpack's first three matches of the 2021 2B volleyball season, they've had a bit of an uphill battle and have dropped each of the matches in three sets.