DW holds on for two-point win 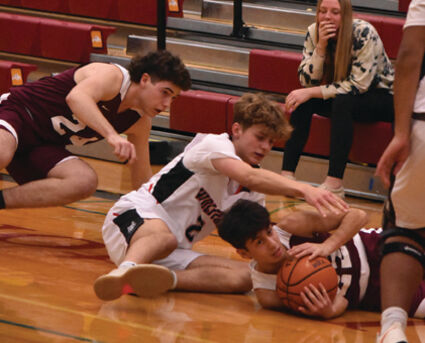 In the exciting first few seconds of the DW-WWVA game, the boys were already hitting the maple, scrapping for a loose ball. The Wolfpack held off a Knight rally in the fourth quarter to win by a whisker, 44-42, in Dayton Tuesday night. Here, Ryland Kilts (2) and Travis Lyford (22) wrangle for possession.

DAYTON–After jumping to an 18-12 first-quarter lead, the Dayton-Waitsburg Wolfpack boys held on through the second half to preserve a 44-42 win over the Walla Walla Valley Academy Knights here Tuesday. The win was the first conference victory for the Wolfpack, who are now 1-4 in league, 3-8 overall.

An earlier canceled game against Warden was rescheduled for Friday, Jan. 21 here, and Columbia...