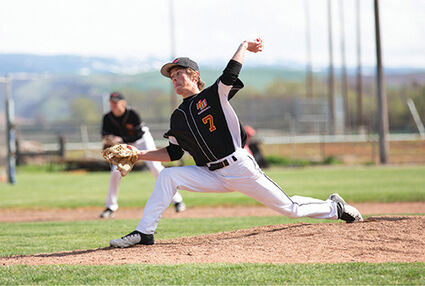 Klint Kuykendall pitched two innings in Dayton-Waitsburg's 14-4 loss to the River View Jayvees last week, and slapped three hits and one RBI while scoring two runs for the Wolfpack.

WAITSBURG–After the River View Jayvees broke a 4-4 tie with five runs in the fourth and fifth innings, and going on to a 14-4 win in five innings, the Dayton-Waitsburg Wolfpack rebounded to go seven innings in the nightcap, ending in a 5-5 tie after the Panthers managed the tying run in the top of the seventh.