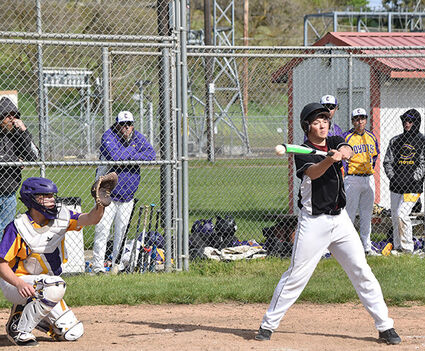 It was a swing anna miss for Wolfpack batter Rueben Yutzy in Dayton-Waitsburg's first-game loss to the Columbia Coyotes earlier this week. DW wrapped the 2022 season with the final double header in Waitsburg last Monday.

WAITSBURG–It was a long season for the Dayton-Waitsburg Wolfpack, which finished up its schedule with a pair of losses to Columbia High School Monday, May 9. The Wolfpack season record was 0-18.

Columbia piled up ten runs through the second, third and fourth innings to clip short the first game 10-0 after five innings, then was in the hunt at 5-4 until the sixth and seventh innings of the nig...