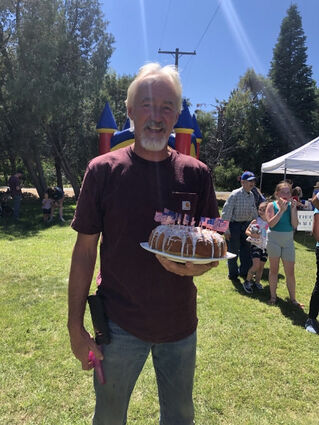 From the delighted smiles of six-year-old Claire Gemmell, daughter of Jason and Dayton Chronicle Reporter Melissa Gemmell, who was really enjoying a cold piece of watermelon...to the fun of dunking Sheriff Joe Helm, or winning a cake in the cake walk, or competing in a friendly game of corn hole, there was plenty of patriotic fun last Monday at the Columbia County Conservatives' Old Fashioned Fourth of July Picnic in the Park.

DAYTON–Scores of patriotic citizens of Columbia County and environs joined in the Dayton City Park to celebrate Independence Day 2022 at an event sponsored by the Columbia County Conservatives, an "Old Fashioned Family Fourth of July."

From noon until 4 p.m. on the Fourth of July, the fun to be done included traditional picnic activities such as a cake walk, Bounce House, Dunk Tank, Tug of Wa...