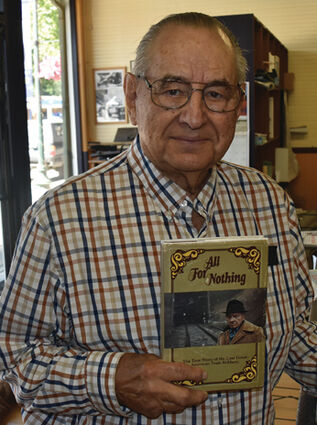 Columbia County resident Jim Peterson holds a rare book, "All For Nothing," which is inscribed with the signatures on not only one of its two authors, but also of Ray De Autremont, the man pictured on the cover standing in front of the entrance to the now infamous Tunnel 13.

DAYTON–It's called a doppelganger and it means "a ghostly double of a living person," or "evil twin," or "a remarkably similar double."

The definition that fits here is the last of the three. In October, 1923, Roy Nichols, the grandfather of Columbia County resident Jim Peterson, was arrested in LaGrande, Ore., on suspicion of murder and train robbery.

Nichols was doubly cursed. He not only bore an uncanny–and unfortunate–physical resemblance to two of three men who were the subject of what eventually became a world-wide manhunt, he also was blessed with the first name of one of the twins, Ray and Roy De Autremont. Nichols's facial characteristics, as well as his stocky, square build, put him on the police's radar.

He wasn't alone. As the net widened with the passage of time, various men across the United States were taken into custody and grilled as to their whereabouts on that fateful October 11, 1923, day when the Southern Pacific San Francisco Express No. 13 was held up and four men murdered in the Siskiyou Mountains, just outside Tunnel No. 13.

Peterson has "All For Nothing," the book about what is billed as "The Last Great American Train Robbery," and has not one, but two uncanny connections to the story. In addition to his grandfather being arrested and held in a jail cell for 36 hours before he could prove his true identity, Peterson has an oblique yet tragic connection to one of the book's authors, Larry Sturholm.

Sturholm, unfortunately, was the victim of a double murder in August, 1989, in Issaquah, Wash., 13 years after publishing "All For Nothing" with co-author John Howard. Sturholm was an Emmy-award winning television personality at Seattle's KIRO-TV when he was killed by William "Bill" Pawlyk, Jr., who at one time had been an acquaintance of Peterson's in the Tri-Cities.

Both events were tragic. The De Autremont twins, Ray and Roy, and their brother, Hugh, during the prosperity of the Roaring Twenties, had tired of laboring for a living and turned to crime to make one big score and be set for life. They planned a heist of what was dubbed the "Gold Special," the train from Seattle to San Francisco, known to carry, at times, gold or cash. They used a suitcase full of TNT to blow open the door of the baggage car which they believed held the valuables, but that charge turned the entire car into match sticks in addition to killing the mail clerk within.

Even if there had been $40,000 on board, it would've probably been obliterated by the blast. In the confusion, three other rail road employees were shot and killed by the De Autremonts.

The killing of a U.S. Postal Service employee and three rail road employees spurred extensive searches for the perpetrators.

Sturholm had been a popular KIRO reporter when he was stabbed to death by Pawlyk, Jr. in a tragic turn of life for the Naval Academy graduate, Naval reserve officer, graduate of the prestigious Wharton School of Business and chairman of the Richland Economic Development Board. Pawlyk Jr. had been dating 35-year-old Debra Sweiger for about six months in 1989 and had spent a late-July weekend with her at her Issaquah home. He departed for the Tri-Cities, but turned around, hoping to confront her about "tension" between them.

Sturholm, 46, and Sweiger, were making plans to vacation on the Cayman Islands. According to a story in the Tri-City Herald, Pawlyk Jr. waited in the home and subsequently had an argument with Sturholm. It ended when Pawlyk Jr. stabbed Sturholm to death. He then attacked Sweiger for 30 minutes, leaving her for dead, then attempted to kill himself with the knife. Police found him in a bathtub full of water and thought he was dead. He was in the tub eight hours until police, returning with a search warrant, heard him cough. He died October 6, 2021, at the Airway Heights Correction Center.

Hearing of Pawlyk's death prompted Peterson to pull "All For Nothing" from his book shelves.

Jim Peterson's grandfather, Roy Nichols, with one of the authors, John Howard.

In October, 1923, the inept trio of De Autremonts scampered away from their botched train robbery empty handed, hiding in the woods while searchers scoured the mountains and valleys in vain. Hugh enlisted in the Army, and was eventually arrested while on duty in the Philippines when an alert officer remembered seeing his face on one of nine million wanted posters spread about the globe. Ray and Roy were working under aliases in Steubenville, Ohio, when captured.

Convicted in Jackson County, Ore., the three were sentenced to life in prison. Hugh was paroled in 1958. He moved to San Francisco, and died of stomach cancer in 1959. Roy suffered from schizophrenia, was transferred to Oregon State Hospital, and was released in 1983. He died in 1984. Ray was paroled in 1961, lived in Eugene, Ore., and died in 1984.

Peterson's copy of the book is signed by Ray De Autremont and author John Howard.